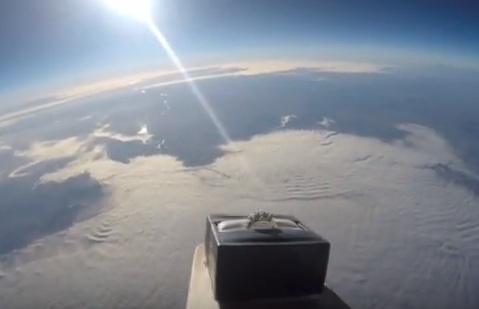 As far as romantic proposal gestures go, this one is a little ‘out there’ – in more ways than one!

Canadian couple Shawn and MayLynn Wright got engaged in 2014 in Barcelona. Shawn used a ‘stand-in’ ring for the moment, promising his future wife  he’d save up and buy her an ‘official’ ring as soon as possible. He spent the next year doing just that, and bought an exquisite ring for the re-proposal.

Shawn didn’t just want to do the exact same thing again, however. He wanted to make this ring extra special for the love his wife. So… he sent it into space!

He wanted to ‘enchant’ the ring by sending it to the moon and back – well, almost. He mounted the ring, in its box, onto a wooden kitchen spatula. He attached the apparatus to a special balloon designed for just such an occasion and set it off, hoping it wouldn’t get lost in the atmosphere somewhere. As you can see, the footage is absolutely stunning:

It reached 110,000 feet (that’s much, much higher than most planes reach)  before landing near Taber, some 300 kilometres away from the couple’s home in Calgary. He tracked the whole journey with a GPS tracker so he would know instantly if the unthinkable happened. Thankfully, it didn’t and he collected the ring and brought it back to MayLynn, who was delighted (if a little bewildered) by the story.

Love makes us do strange things sometimes. Shawn, we salute you for creating a beautiful, extra-terrestrial engagement moment for your lady love.