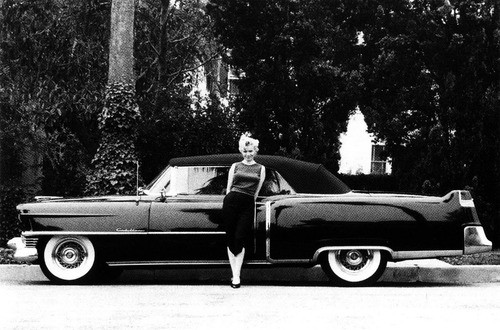 No, they don’t mean the same thing…

Shopping for an engagement ring comes with a lot of information to cram into your brain in a short space of time. Ring sizes, setting types, stone shapes, the 4Cs… and that’s just for starters! If you’re considering getting an antique engagement ring, you’re probably already confused by the many adjectives used to describe ‘old’. ‘Vintage’, ‘period’, ‘antique’, ‘estate’, ‘retro’… there’s so many! They’re all used to describe an older ring with a history and a story, but there is a difference between each term. So what’s the deal? We’ll tell you…

Antique engagement rings are at least 100 years old. Some jewellers will round the end year up or down from 1900 to anywhere around 1920, but you will never hear a good jeweller describing something from the mid to late 20th century as ‘antique’. Antique engagement rings generally encompass two jewellery periods; the Georgian era from 1714 – 1837 and the Victorian era from 1837 – 1885. All rings are handmade, usually one of a kind, and feature extremely high quality craftsmanship. They’re also becoming increasingly rare and are often very delicate, so they require more maintenance and care. Many antique engagement rings aren’t suitable for everyday wear, which is something you need to take into consideration when you buy. If you do go for an antique however, you’ll be rewarded with exquisite and unique style. There is a greater variety of designs with the Victorian era, but both periods are equally beautiful; think elements of nature, scrolls, bows, lots of filigree and beading – and that’s just a taster. 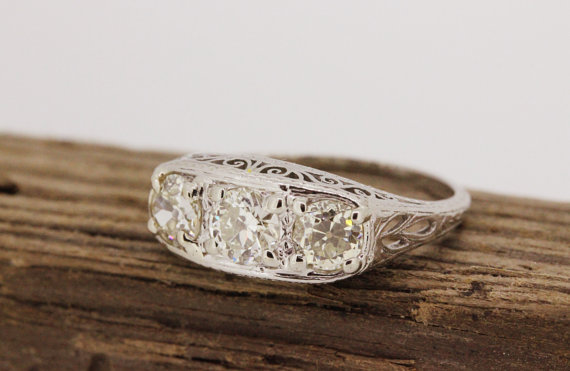 Vintage engagement rings are from a bygone era, but one that has occurred within the last 50 – 100 years. The definition of a vintage ring is a little looser than an antique, as it can also rightly be used to describe a trend that was once popular in the past and is now making a comeback. In general, there’s always a rotating style that is considered ‘vintage’ as trends change. Furthermore, on a yearly basis rings that would have fit into the category of ‘vintage’ before transfer to ‘antique’ simply because of their age. A number of different jewellery eras are regarded as vintage. They include;

What about Estate Engagement Rings? 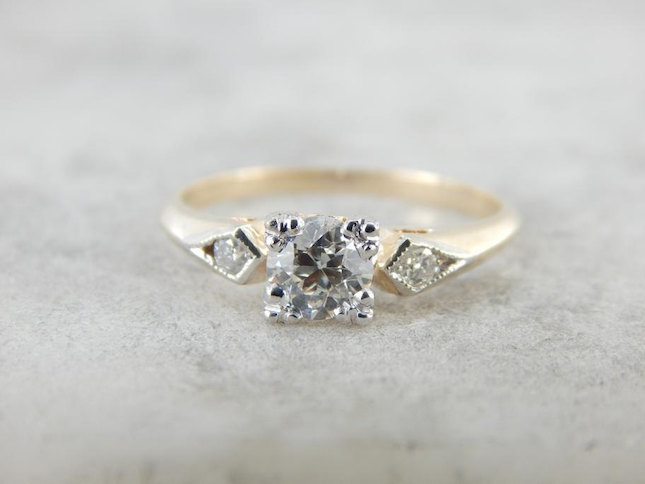 There seems to be a lot of confusion around the term ‘estate’ where new engagement ring shoppers are concerned. Does it mean the engagement ring was left by someone who died? Does it mean it’s definitely antique? Was it purchased at an estate sale? The bottom line is this: estate jewellery is any piece of jewellery that has been pre-owned. Although by default it often is antique or vintage, it doesn’t necessarily have to be. It doesn’t need to have come from somebody’s will or an estate sale either, but occasionally it will. It could be an engagement ring from 20 years ago that someone is selling after an upgrade, or it could be an heirloom passed down for hundreds of years. It’s an all-encompassing term, but in many ways it’s either used as an alternative word for ‘antique’ or ‘vintage’, or as a more appealing way of saying ‘second hand’ or ‘pre-owned’.

Any other words like ‘historical’, ‘period’ or ‘classic’ used to describe your engagement ring is really just another adjective that you shouldn’t pay much attention to; your jewellery is just trying hard to sell! Furthermore, if you hear a jeweller using the two terms ‘aiitque’ and ‘vintage’ interchangeably about the same engagement ring, it could be a sign that they’re not up to scratch. Feel free to quiz them on the difference before going any further. Hope that helps!