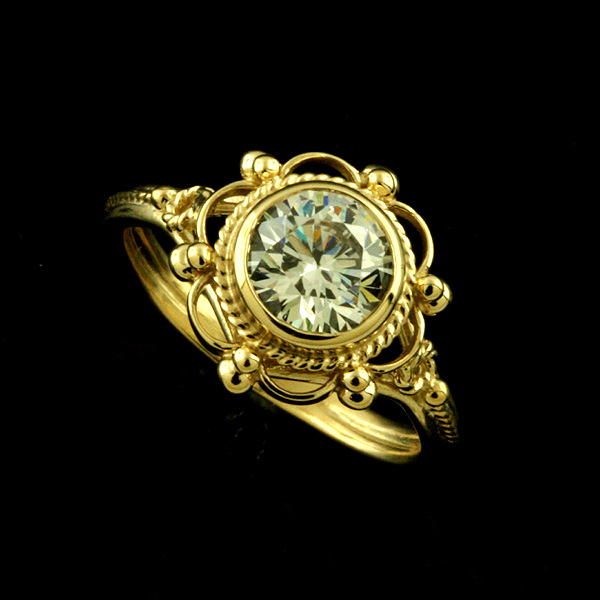 Antique engagement rings are some of the most sought after among today’s brides, who seek something alternative but timeless to wear on that special finger. The Victorian era is well known for its elaborate style and exquisite craftsmanship, and Victorian engagement rings are definitely some of the most beautiful – and most rare – out there. Here’s what you need to know about this opulent era in jewellery history…

The Victorian period spans the reign of Britain’s Queen Victoria, which lasted from 1836 to 1901. It’s a very expansive period that saw plenty of rising and falling trends and sub-styles within the period, but the overall aesthetic and characteristic design remained largely the same. Victoria reigned over many decades of peace and prosperity in Britain and the era was characterised by ‘refined sensibilities’ – or in other words, high morals, strait-laced language and formality. It was also when the Industrial Revolution kicked into overdrive and the British Empire reached its economic, political and cultural peak. The Queen was at the head of the most elite social circles in the world, and every member of the nobility looked to her for style inspiration. She inherited the throne at just 18 years old and was everyone’s definition of youth, beauty and femininity at the time. Needless to say, she was a Queen loved by everyone.

With all that prosperity it’s no surprise that the words most commonly used to describe Victorian engagement rings are ‘elaborate’, ‘opulent’, and ‘ornate’. Think big gemstones, fine metals, lots of detailing and impressive settings. Victorian jewellery is so highly styled that even the Victorians only wore it for special, formal occasions! In the early years of Victoria’s reign her jewellery was more delicate, romantic, small-scale and feminine. After her mother’s and husband’s’ deaths in 1860, her style became more sombre and grandiose as she mourned. Towards the end of her reign, she turned to sentimentalism and romanticism once again. 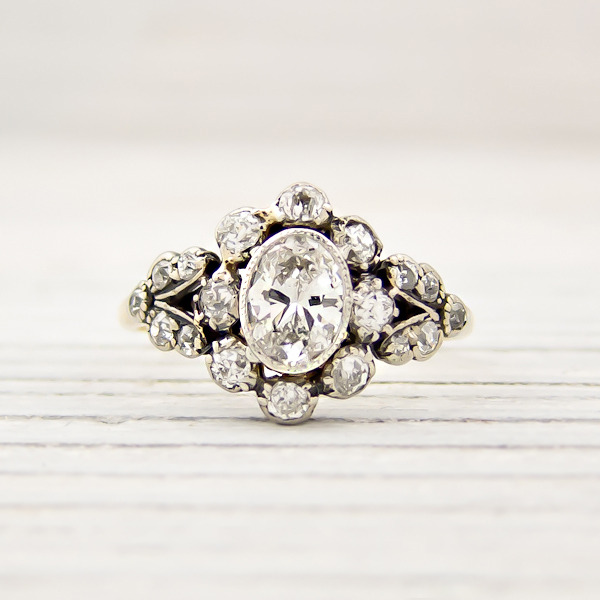 In the early Victorian era, also known as the Romantic era, diamonds were not yet commonplace so it was customary for engagement rings to feature the lady’s birthstone instead. Queen Victoria received an emerald engagement ring from Prince Albert with the band taking the form of a yellow gold snake, which became one of the most popular trends throughout the era (snakes symbolised eternity). Similarly in the early days yellow gold was the metal of choice as platinum was not yet widespread. Designs were characterised by florals, animals, and romantic symbols likes bows, hearts, love birds and petals. Victoria also had penchant for opals, and this became a hugely popular stone in the era’s jewellery.

The middle Victorian era is known as the Grand period. As world trade increased and access to gemstones became easier, larger gemstones were used in jewellery and with them more elaborate settings. SIlver and black were popular metal and gemstone colours, a reflection on Queen Victoria mourning the death of two of the most important people in her life. In fact, the very concept of ‘mourning jewellery’ was popularised at this time. Despite the sad context, engagement rings from this time are very elaborate, slightly less romantic and more abstract, and showcase top quality craftsmanship. During the middle Victorian era the South African diamond rush and the USA gold rush occurred, so diamonds and yellow gold were everywhere before long.

By the late Victorian era, the elderly Queen was no longer the trend setter, but people still took inspiration from her legacy. Smaller stones were back in vogue, but the settings were still intricate and incredibly beautiful. The industrial revolution made its mark on the jewellery industry with mass produced, machine made pieces, but it also lead to much improved diamond cuts and new, exciting shapes making their way to the market. The rose cut, which had been standard up til now, was replaced by the something closer to the modern day round brilliant cut. Giving engagement rings was now ubiquitous, and the most popular style was the solitaire diamond. People still sought themes of romanticism and love in their designs, and the ever present florals, bows and hearts were never far away. 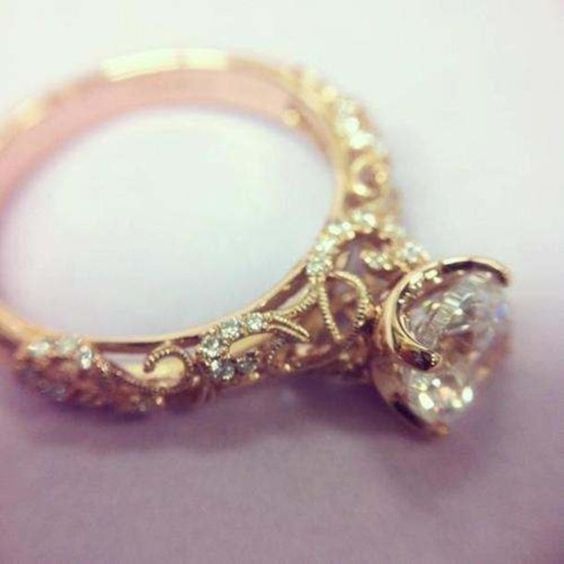 Now here’s the bad news; Victorian era engagement rings are getting harder and harder to come by, which also makes them eye-wateringly expensive when you do find them. As with other historical eras there are plenty of reproduction pieces around, and many of them are very well made and designed (they just lack the authenticity of being a genuine antique). Early Victorian pieces were never intended to be worn every day even when new, so keep this in mind. Your best bed for finding a good condition, somewhat affordable Victorian engagement ring is probably at an auction, so brush up on your bidding strategy and get going!

The standard guidelines for antique engagement rings apply here: make sure it’s in excellent condition, get it properly appraised and valued, talk to your jeweller about upkeep and maintenance, and if you’re advised not to wear your engagement ring every day, then for Pete’s sake don’t wear it every day. We know it’s hard, but it’s better than an engagement ring with a stone that’s lost forever or a setting that’s irreparably damaged.