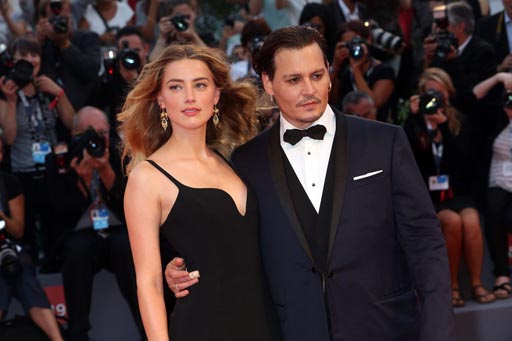 Every week we pick  the best and worst engagement rings to emerge from the land of the rich and famous. This week we feature two rings from two recent divorcees…

Johnny Depp’s wife of 15 months, Amber Heard, sadly filed for divorce last week in what appears to be a culmination of several months of strife for the pair. Amber was taken to court for illegally bringing her dogs to Australia where Johnny was filming the latest Pirates of the Caribbean installment, and rumours (although they are only rumours) have been rife that Johnny’s family were never very fond of his new beau, to say the least.

Whatever happened to bring the marriage to end, nobody can deny that the pair were very much in love at one point. Just one indication of that love is the dazzling engagement ring Johnny gave to Amber. If you believe everything you hear, Amber actually received THREE engagement rings. One was too big so Johnny wore it instead, and another was a simple (huge) diamond. The one we’ve seen her wear the most however is this:

You’re looking at a round-cut diamond that has to be a minimum of 3-4 carats, in a raised prong setting that appears to be yellow gold with platinum, Surrounding the mount is a diamond embellished bezel set on a thick band with scrollwork detailing and more diamond encrusting, giving it all a vintage feel.

Our Verdict: We’re huge fans of Amber’s eternally elegant style, and this ring fits in with her look perfectly. We love the little details that keep it firmly on the old Hollywood glamour spectrum, unlike the big and tacky engagement rings we’ve seen of late. Good choice Johnny.

Sharon and Ozzy Osbourne have been one of our favourite celebrity couples ever since The Osbournes aired on MTV back in the ‘00s. Their relationship has always been a bit of a rollercoaster, but we really thought they could make it through anything – especially considering they battled cancer and substance abuse together while millions watched. So it was saddening and shocking to hear that they finally called time on their 33-year marriage.

Sharon has sported a lot of snazzy diamond rings on her engagement finger over the years. When they first got hitched, Ozzy gave her a pretty average diamond ring from H Samuel because they ‘didn’t have two pennies to rub together’. Later, he got her this 10-carat round cut diamond from Tiffany and Co. to replace it:

The stunning diamond has an 8-prong setting and is surrounded by a twisted, diamond-encrusted band. It’s said to be worth over $200,000 – a big upgrade from a standard H Samuel ring! Fun fact: it was stolen from their mansion in England several years ago, but fortunately an appearance of the ring on Crimecall meant was spotted by an eagle-eyed fan and returned to Sharon unharmed.

Our Verdict:We love Sharon for her outspoken attitude and at times outrageous fashion choices, and this ring is perfect for her. But for us, not so much. It’s a bit too big and a bit too brash. Sorry – we still love you though Sharon.