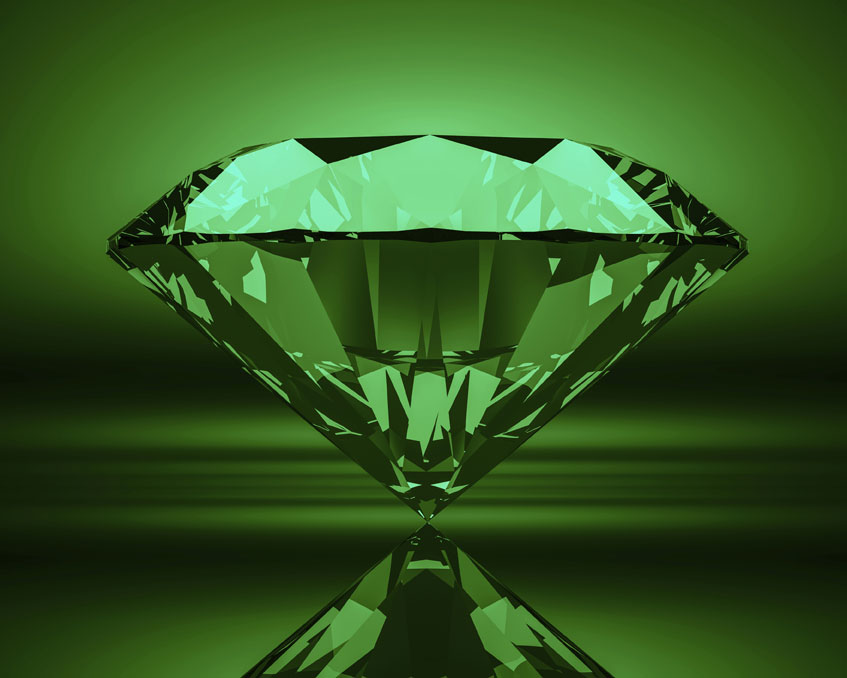 For a long time, engagement rings were all about diamonds, diamonds, diamonds. Nowadays brides are making much more diverse choices, and coloured gemstones in particular have shot up in popularity. There are a myriad of coloured choices out there, but there are only three that are considered to be ‘precious’ gems. They are sapphires, rubies and emeralds, all of which are almost as indestructible and equally as beautiful as diamonds. We decided to take a detailed look at each, so here’s what you need to know about emeralds…

The oldest known emeralds are 2.97 billion years old, originating from South Africa. The ancient Egyptians, although maybe not quite so old as that, were also fond of the stone – especially a certain Cleopatra. Ancient Rome’s Pliny the Elder also described it in his 1st century tome ‘Natural History’, saying that ‘nothing greens greener’ than the stone.

The first known emerald mines were in Egypt and dated from 330BC right up to the 1700s. The Incas also mined them, and when the Spanish arrived to what is now Colombia in the 16th century, they traded most of the Inca’s supply for precious metals. As a result, emeralds arrived on European and Asian shores and found their way into the jewellery world.

According to certain legends, emerald bestows the wearer with the gift of foresight, truth, eloquence, protection from evil spirits, and could even cure cholera and malaria!

Emerald measures between 7.5 to 8 on the Mohs scale, making it slightly less hard than ruby and sapphire but still much more durable than most other gemstones. Deposits have been found in Madagascar and parts of East Africa, Colombia, Brazil, Central Asia and Russia.

Emerald is the gem variety of the mineral Beryl. There is often a stark division among gemologists on the level of green hue in the stone that makes it an emerald, as opposed to a less valuable green beryl. Beryls come in almost any colour, but a deep green beryl that has been coloured by chromium is usually classified as an emerald instead. Definitions differ between the United States and Europe and other areas, however.

Colombia provides between 50-90% of the world’s emeralds, depending on whose statistics you choose, and mining increased a whopping 78% between 2000 and 2010. Zambia is the second largest producer, delivering 3.74 tons of the green stuff in 2011.

Emeralds were a favourite stone for vintage jewellery, but if you opt for a vintage emerald piece, make sure to have it thoroughly assessed for durability. They often work better as an accent to diamonds rather than as a central stone, as this reduces the risk of it picking up scratches over time. Fans of gold will be glad to know that emerald works especially well with yellow tones.

Emerald is the birthstone for May and the anniversary stone for the 20th and 35th years.

Emeralds are the least expensive of the three precious coloured gemstones. This is because they are often heavily included, meaning they are more susceptible to breaking or splitting than rubies, sapphires or diamonds. While rubies and sapphires are valued on colour primarily, clarity also plays an important role with emeralds. As with the others however, a darker colour makes for a higher price tag.

Oscar winning actress Halle Berry wears a beautiful square cut emerald in the centre of her engagement ring, and fellow actress Olivia Wilde has a round diamond with a wonderfully elegant emerald halo. Probably the most well known figure to sport and emerald however is Jackie Kennedy, whose emerald and diamond combo (see above) is one of the most famous engagement rings in history.