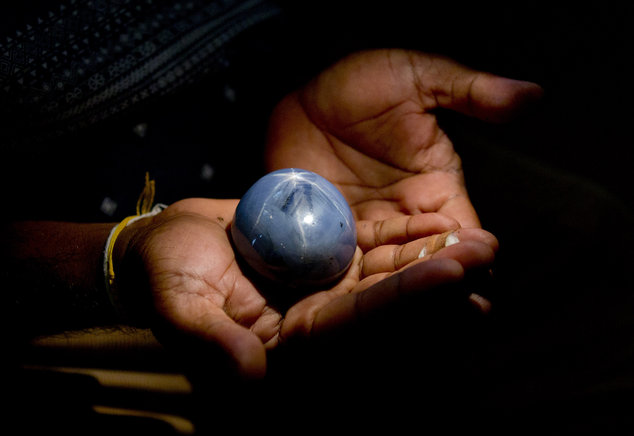 Guess how much this baby weighs…

The world’s largest Star Sapphire has emerged from the depths of a Sri Lankan mine. Discovered last autumn in the well known mining area of Ratnapura, the anonymous owner of the gem finally told the world of its existence a few days ago.

We know what you’re thinking… it doesn’t look much like the sapphires we’ve all seen before, does it? That’s because it’s a Star Sapphire. These rare gems appear opaque in usual circumstances, unlike the deep blue hue and perfect clarity of normal sapphires. But when placed under a light, a six pointed star reveals itself. Pretty cool!

The owner of the gem is a Sri Lankan businessman, who bought it back in Se

ptember 2015. As soon as he examined it closely, he knew it was a big deal. Once the Gemological Institute of Colombo confirmed his suspicions and declared it to be the biggest blue sapphire in known existence, the owner decided to sell.

Naming it the Star of Adam, he based the astronomical asking price on the Black Star of Queensland, a star sapphire which was reportedly sold for $100 million in 2002 (it was 9 carats smaller than this one, hence the price hike).

Both sapphires were mined from the same area, so we could yet find some more even bigger stones some time in the future. It’s unlikely that an average collector will be able to afford to add it to their collection, so most are expecting it to end up in a museum collection.

So what will the mysterious owner do with his riches once the gem is sold? He told journalists that it ‘has not changed my lifestyle. But, I feel thrilled to be the man owning this gem. It is good for the ego.’ He also said ‘I have lived in affluence, but now I feel even more blessed.’