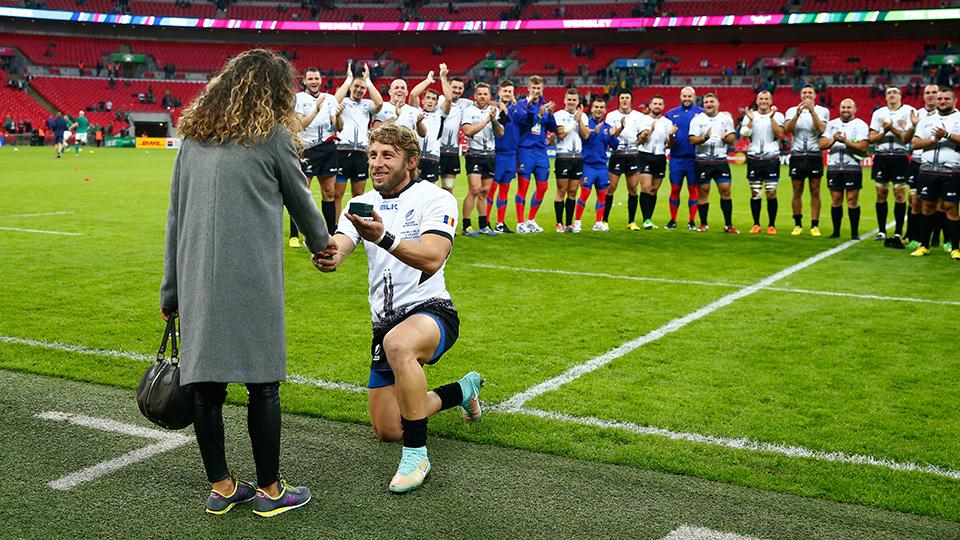 You’re probably aware that the Rugby World Cup is underway at the moment. Hosted every four years since 1987, it sees 20 of the best rugby teams in the world battle it out for the title of world champions while an audience of millions watches on television and thousands cheer on their teams in the stadiums.

This year, the tournament is taking place in England, and last Saturday a match between Ireland and Romania was held in Wembley Stadium, the largest in the country with a capacity of 90,000. Ireland had an easy victory with a final score of 44 – 10, leaving Romania with a bitter disappointment.

So what does all this have to do with an engagement? You’re probably thinking someone in the crowd got down on one knee and the whole thing was captured on the big screen, right?

Florin Surugiu, a scrum-half for the Romanian team, found an easy way to cheer up his teammates after their loss; he brought his girlfriend out on the pitch and popped the question in front of the whole team after the final whistle! Most of the crowd had already left by the time it happened, but the whole event was captured by the many TV cameras in the venue.

After the teams had completed their lap of honour and returned to the changing rooms, everyone thought the action was over for the night. But then, the Romanian team came back on to the pitch and lined up shoulder to shoulder, facing the tunnel. Alexandria, Florin’s girlfriend, was lead down to the pitch from the stands and Florin made his way out from the centre to drop to one knee.

Naturally, she said yes, and the 22 strong team behind them watched as they enjoyed a (semi) private moment together before swooping in to congratulate the happy couple. A very happy birthday for Alexandria, and a wonderful surprise for the fans who did stick around to see what happened!

Florin said he decided on the romantic proposal as soon as he heard the date of the match – September 27th, which just so happens to be the same day as his now fiancee’s birthday. Considering the game was taking place in Wembley in front of the whole world, he thought it would be the perfect way to make the moment extra special.

While he had full support from his teammates, all of whom knew of the plan beforehand and cheered on the couple after Alexandria said yes, his coach was not so sure. ‘I tried to advise him not to… It’s probably too romantic for me but I’m sure for her it was very romantic’ he later said. The Irish team were one of the first to congratulate the couple, praising Florin for his bravery!

The couple plan to marry next year during the rugby off season. Watch the romantic moment unfold below.