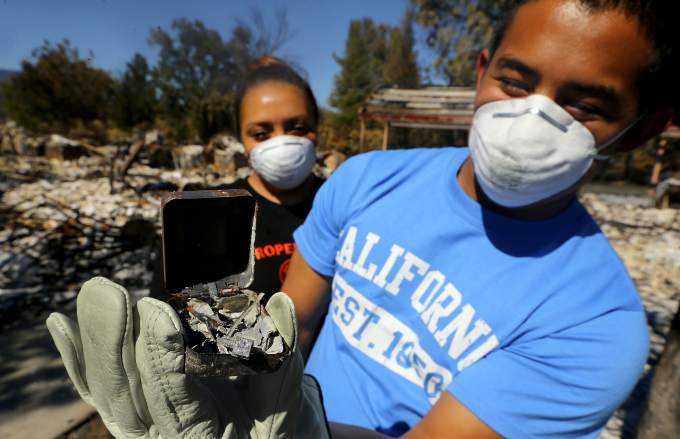 For the last few weeks parts of California have been ravaged by wildfires, leading to many homes being evacuated or worse, burnt to the ground. So far 1,783 structures have been destroyed and, sadly, three people have died as a result of the fires.

One of the affected areas, Middletown, was the home of Eric Lopez, his girlfriend Annette Perez and their baby son, Eric Junior. They were told to evacuate their apartment building as soon as possible, and had to leave with just the bare essentials. What Annette didn’t know was that Eric had recently bought her an engagement ring, and had hidden it behind their TV as he waited for the right moment to pop the question.

In the chaos that came along with the wildfires however, Eric was unable to retrieve the ring before they left. Unfortunately, their apartment building was one of the many destroyed and he feared the worst. They weren’t able to return to the site for a week, but when they did, he immediately began searching in the rubble. And guess what…

The ring, hidden in a small metal box, was in the exact same spot where he’d left it! Although covered in ash, it was still in perfect condition, and he surprised Annette with it there and then
(although he had told her what happened previously since it was the only thing on his mind). Eric is still planning a special, not-so-surprise proposal as soon as the family’s lives are back on track.

It just goes to show that diamonds really are forever!

Check out the full story on ABC News.