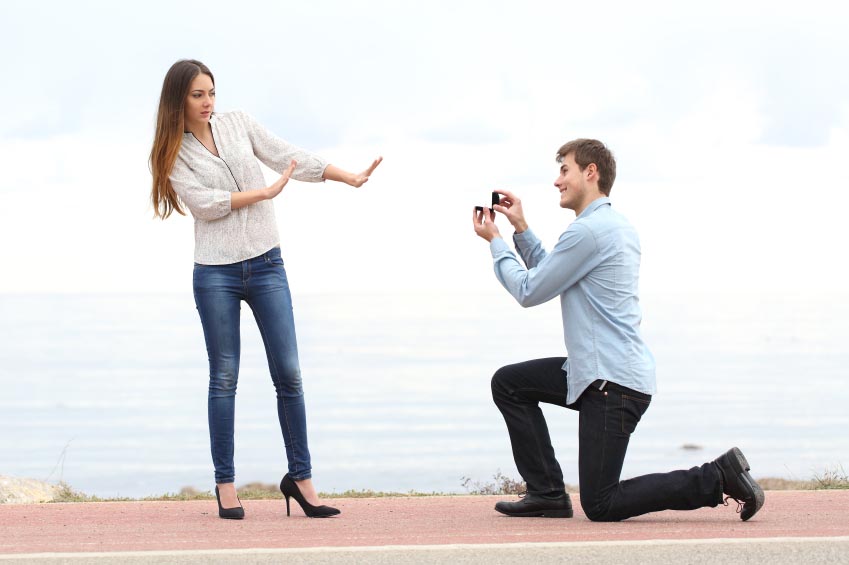 It happens. He makes a huge, PUBLIC, romantic gesture that embarrasses you to your very core and is 100% not the way you’d hoped he would propose. Or on the other hand, he makes no fuss whatsoever, doesn’t even get down on one knee, and asks for your hand in the most unromantic way possible. Neither of these scenarios fit a bride’s dream proposal, but both are very common. So what should you do if it happens to you?

It’s easy to freak out. An uncomfortable proposal arguably proves that he doesn’t know you as well as he should, or that he doesn’t care enough to take your feelings into account. But don’t jump to this conclusion. Remember the big picture; he loves you enough to want to marry you and spend the rest of his life with you. He either a) tried really hard to make it a special, unforgettable moment by going big and going public, or b) tried really hard to NOT to make a fuss because he – mistakenly, perhaps – thought you wouldn’t want scenario a).

And don’t forget scenario c), in which he knows you better than you know yourself. There are plenty of stories floating around the web of brides who always thought they wanted a big proposal, but then realised they found his fuss-free question-popping to be much more intimate and meaningful. And there’s also a lot of closeted romantics who swore they didn’t want to make a big deal about it, but confessed to being blown away at his thoughtful public proposal.

Either way, if his proposal really isn’t sitting well with you no matter what you look at it, then the best course of action is to tell him. Politely. And after you’ve given your answer, of course! It pays to let it settle, or ‘sleep on it’ first though, because you may feel differently when you’ve had some time to process this massive milestone in your life. And by the way, it IS a massive milestone, so it’s okay to freak out a little. Just remember the way in which he asked isn’t the most important thing here; the question itself and the commitment behind it is.