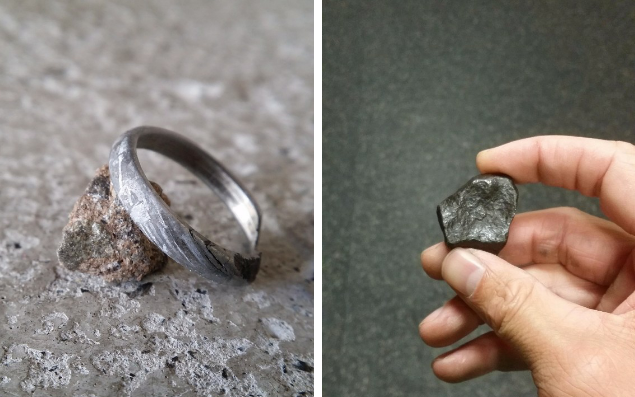 How’s that for bling that’s out of this world?

Some men spend months choosing the perfect engagement ring for their bride to be. And some spend months making it instead! Imgur user Chadmax wanted to do something special when proposing to his girlfriend, so he decided to make his ring by hand. From scratch. And from a meteorite. Yes, really. Granted it’s not the conventional choice, but meteorites are pretty cool; they come from space after all, and his girlfriend is not a fan of diamonds.

From start to finish, Chad says he spent between 35-40 hours working on the ring over two months (because finding excuses and time away from his lady love was difficult). He bought 120 grams of meteorite online for $140, and set about drilling, sanding, grinding and etching in his workshop, sometimes using improvised tools and techniques.

Starting by drilling the inner ring, he had to bypass a divot in the centre of the ring and had barely enough room to carve out the final shape. He also had to keep the rock cool at all times, because meteorites become very fragile if they heat up too much. That meant several minutes of waiting for every few seconds of drilling.

Next, Chad carved off the outer jagged edges of the rock until he was left with a basic ring shape. At one stage he cut it too thin and had to leave part of the ring exposed, with a semi-circular dent. In the end however the exposed edge gave it a raw, unfinished feel that both he and his girlfriend love. They tell people ‘that’s the part that was exposed to space!’, which is pretty awesome if you ask us.

From there, all that was left to do was many painstaking hours of sanding down the edges to get a perfectly smooth surface, then using etching oil to reveal the meteorite’s unique pattern. The finished product glitters in the light and, according to Chad, photos don’t do it any justice.

Pretty cool, right? Check out Chad’s full account, with photos of each and every step: