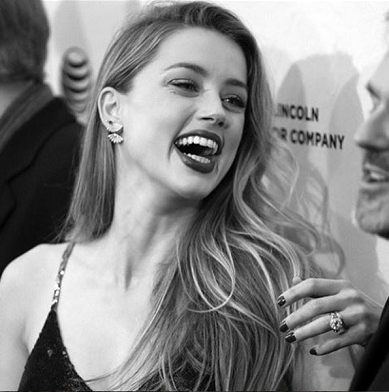 American actress, Amber Heard proudly displayed her huge engagement ring from Johnny Depp. The couple first met in 2011 when they starred together in The Rum Diary. They got engaged on Christmas Eve and will tie the knot in a small ceremony on Johnny’s private island in the Bahamas followed by a barbecue.

“I made some drawings [for the engagement ring] which were maybe a bit out of proportion because I didn’t know what numbers meant in terms of diamond size. So boom! It came back and I realized that the diamond was the size of a human eye and might be a little uncomfortable to wear. If she’s walking down the street and waves, the glare could burn someone’s retina. So I got her this one from a wonderful antique jewellery person in New York. And it hasn’t left my finger since. I’ll get it fitted to her finger and she can decide which one she wants.”