For those who love classic engagement rings with plenty of delicate detailing, an antique piece is definitely the way to go. There’s no more classic, delicate and romantic period in jewellery than the Edwardian era, which ran from 1900 to 1915. If you’re interested in getting yourself an Edwardian engagement ring, read on…

The Edwardian era was named after Britain’s ruling monarch at the time, King Edward (that’s the current Queen’s great grandfather, in case you were wondering). British monarchs at the time weren’t just rulers of the United Kingdom and all of its territories, but leaders of the most fashionable and elite of society too. They were so influential and powerful that their style started wave-like trends across all of continental Europe.

Edward’s era was an interesting one. His predecessor, Queen Victoria, left a powerful legacy and culture behind her. But the 20th century was just kicking off, and with it the beginnings of modern technology were starting to arrive. Design aesthetics were simple, classic, and beautiful with expert craftsmanship, but the occasional foray into the new and experimental wasn’t all that uncommon. Edward was known for his carefree and luxurious lifestyle and although he was a traditionalist, was not quite as conservative his mother. These qualities are definitely apparent in Edwardian jewellery. 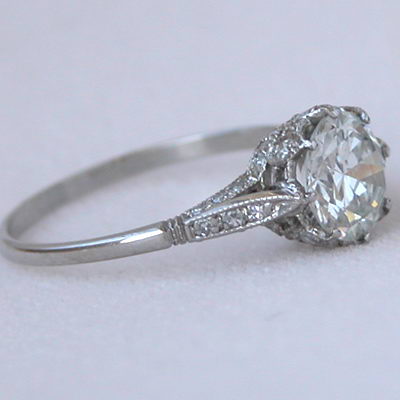 Edwardian engagement rings can be summed up in three words; luxurious, elegant and, ironically, timeless. While machine made jewellery existed at the time, handcrafted pieces and excellent quality craftsmanship were valued above all else. Traditional techniques with very delicate detailing and ornamental elements was the order of the day. Many jewellers like to characterise the Edwardian period as ‘lace translated into platinum and diamonds’.

Thanks to discovery of massive diamond supplies in South Africa, the white beauties began to make their way into the jewellery collections of the elite at lightning speed. Pearls were also enormously popular, as were rubies and sapphires. Platinum was the metal of choice, not just because of its strength and sheen but because it worked best with diamonds, pearls and lace. It was also readily available for the first time, and best suited to the period’s intricate designs – gold or silver would never have lasted in such detailed pieces.

Filigree and milgrain (fine precious metal wire formed into shapes or strings of metal beads edging a jewel) were heavily used, as were invisible settings (where the metal holding the stones in place can’t be seen). Threads of gold, silver and platinum were added to settings in flowing, classical shapes. Jewellery was typically seen as an expression of femininity and was worn with silk, feathers and the ever popular lace (some wedding dress inspiration, perhaps?) 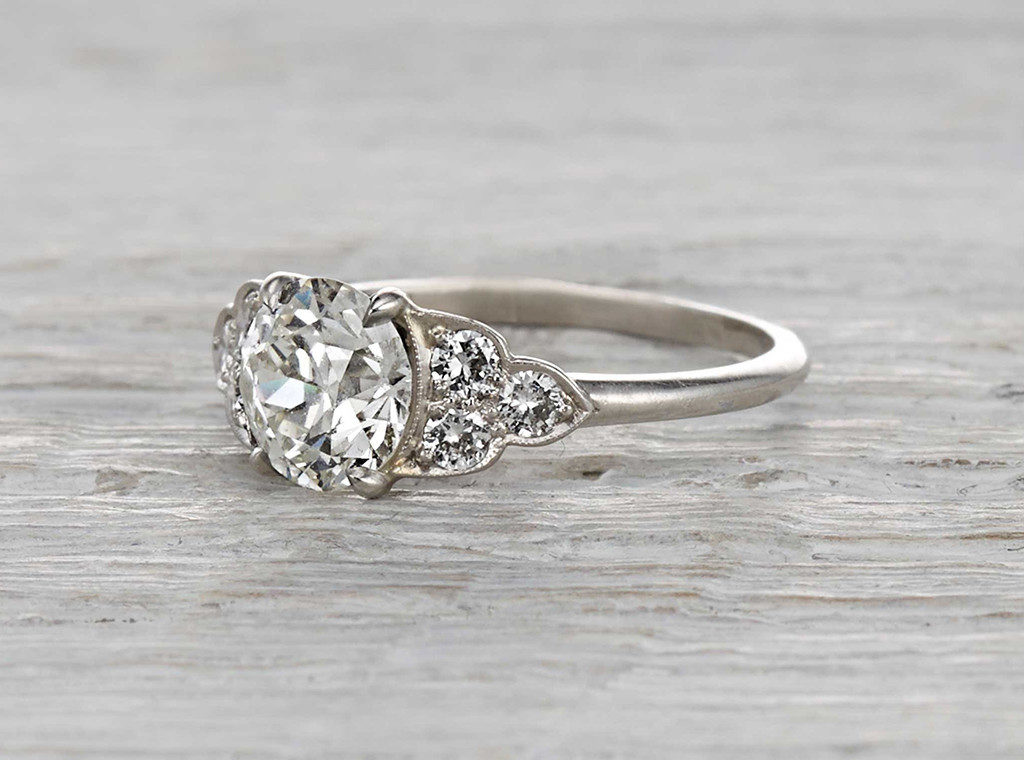 Edwardian engagement rings took influence from the ancient Greeks and Romans as well as the Napoleonic and French Baroque eras. That lead to popular motifs including scrolls, laurel wreaths, garlands of flowers, and the occasional tassel or bow. In all cases, pieces were designed to show off the inherent beauty of the gemstone rather than to show off an elaborate design.

If you’re considering an Edwardian engagement ring, there are a few important things you’ll need to know. Because they are at least a century old, extreme care is needed. An Edwardian ring is not the kind of engagement ring you can wear while digging up the garden or washing the dishes. Because they are so expertly crafted by hand and delicate, they are more susceptible to damage – no matter how expert the craftsmanship may have been.

Also because they are a century old, Edwardian engagement rings are slowly becoming more difficult to come by. Your best bet is to head to an auction house or two to see what’s on offer, rather than going to your local jeweller and hoping for the best. Auctions have a wider choice and a certain amount of flexibility on price.

Once you find your ring, the standard guidelines for antique engagement rings also apply. Make sure it’s in excellent condition, get it properly appraised and valued, talk to your jeweller about upkeep and maintenance, and if you’re advised not to wear your engagement ring every day, then for Pete’s sake don’t wear it every day. We know it’s hard, but it’s better than an engagement ring with a stone that’s lost forever or a setting that’s irreparably damaged.