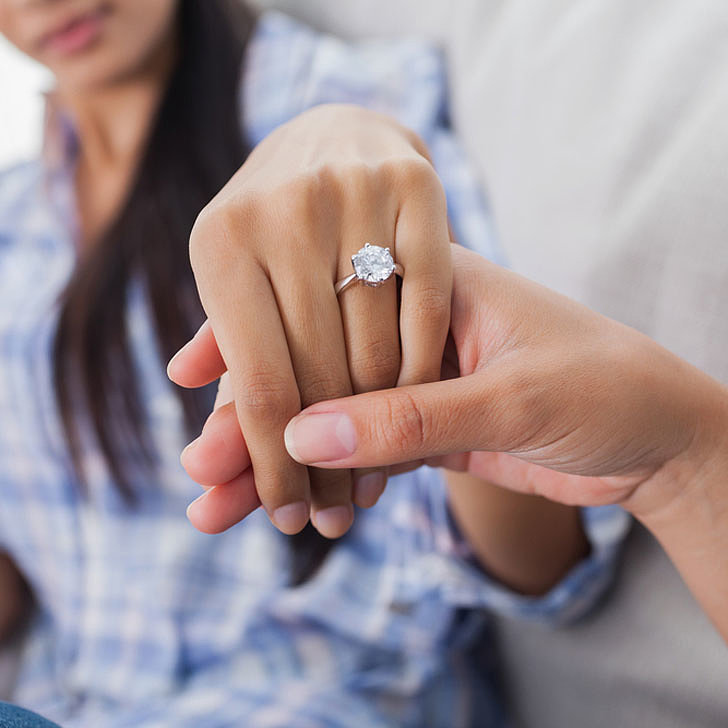 Despite the fact that it goes against almost everything this blog is about, there’s an up-and-coming engagement ring trend that calls for further investigation. That trend is… NOT wearing an engagement ring. Yes, really.

Everyone from Vogue to the Huffington Post has published articles about this in recent years, mostly detailing the reasons why particular people decided to stop wearing the rings they already had. But if anecdotal evidence is anything to go by, the amount of soon-to-be-married couples who choose not to even purchase an engagement ring in the first place is on the rise too. Simple wedding bands are becoming the go-to marriage symbol instead, and we can kind of see why…

Not everyone enjoys the whirlwind that comes with getting engaged. While the various well wishes and gifts from family and friends are of course appreciated by every couple, sometimes the endless questions about and demands to see the ring are not. To be fair, it puts enormous pressure on the bride and groom when people openly judge the ring’s size, appearance and cost, however well-intentioned their questions may be. So we can absolutely see why some brides choose to forego it completely.

…Or it attracts the wrong kind

On the other side of the the coin, there are certain types of people who pay attention to your bling for the wrong reasons. There are countless stories of women who have been mugged, attacked or worse because someone spotted the sparkle of their diamond and decided it was probably worth enough money to warrant taking it for themselves.

It costs a fortune!

The economic crisis that occurred over the past decade means that a hell of a lot of people are still overcoming financial issues, and will be for some time. In case you didn’t already know, weddings don’t come cheap anymore. Neither do houses, or providing for future children; all things the average couple will be taking into account when they get engaged. Plus, the most basic diamond engagement ring will cost an absolute minimum of a few hundred dollars. So why not save yourself some cash and spend it on realising your dreams instead?

For past generations, a marriage was not exactly seen as the equal partnership it is today. In some societies wives were seen as little more than property, had a strict set of duties once they married, and were expected to be nothing other than a wife and mother for the rest of their lives. Thankfully, times have changed drastically. However, that means that some people view the engagement ring as a symbol of ownership, or general inequality. There are two solutions to the problem; either get the man a diamond too, or just stick to plain and simple wedding bands!

Sure, an engagement ring is traditional, and a beautiful symbol of your other half’s love and commitment to you. But, at the end of the day, that’s all it is; a symbol! You know he loves you, wants to spend the rest of his life with you, and wants to do whatever he can to support you and make you happy (or at least, we hope you do!). So why do you need a piece of jewellery on top of all that? If he got down on one knee and asked you to marry him without a ring, would your answer have been any different?

We’re not saying nobody should ever wear an engagement ring. If it’s what you want, then go for it! But it does make for some food for thought….