When it comes to hunting down emerging engagement ring trends, our first ports of call are Instagram and Pinterest. A treasure trove of what new brides are thinking and a direct insight into styles they like and dislike, it has yet to steer us wrong. Lately however, we’ve been seeing a new trend that we’re honestly not too sure about… cameo rings.

What the heck is a cameo ring, we hear you ask? Allow us to explain. A cameo is a small scene or figure carved in relief (i.e. raised from the surface). It has origins way back in petroglyphs – figures carved into rock – which began to appear around 15000 BC. The first ‘official’ cameo however appeared much later, between 300 and 6 BC in Alexandria, Egypt. They were used to declare faith, loyalty, or other admirable morals and were carved into hard stones like agate and later gemstones, coral and even lava or shells.

By the Elizabethan and Victorian eras, cameo carvings had become a common fashion accessory and were set into any and every kind of jewellery. The most popular were rings, brooches, earrings, and watch fobs. They were worn by women and men as symbols of status. If you had a cameo carved from lava or shell for example, it was clear that you were well travelled and thus very wealthy. Napoleon and Queen Victoria are just two famous historical figures who were fans of cameo jewellery. Much more recently, Vanessa Hudgens of High School Musical fame has been spotted wearing one regularly… possibly as an engagement ring. 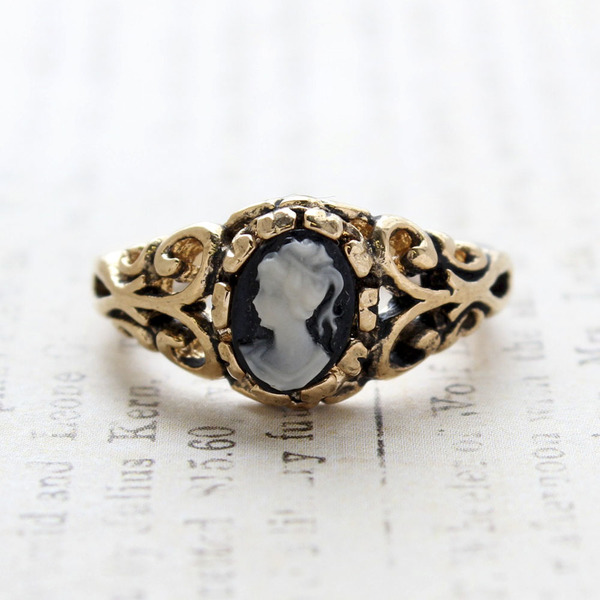 We’ve seen a noticeable spike in this antique style over the past couple of months. For brides on the hunt for a truly unique and truly non-traditional engagement ring (i.e. not a diamond solitaire), it could be the new big thing. With that in mind, here’s what you should know about cameo rings: