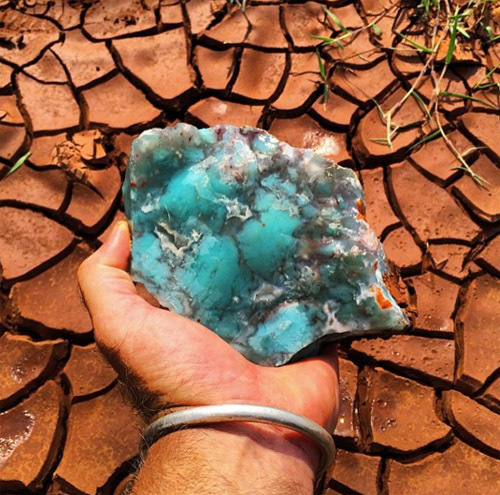 Never heard of aquaprase? Well you will, and very soon…

Yianni Melas is a veteran gem explorer. A former instructor at the Gemological Institution of America, he has travelled the world sourcing precious stones for Swarovski and also designs and creates his own jewellery from his home in Cyprus. He is known for his advocacy of working closely with locals to source gemstones in the ground, and then continuing those relationships to help improve and develop local (and often disadvantaged) communities.

Back in 2014 Yianni was doing just that in a secret African location when he discovered something very unusual. Long thought to only have a few stray opals, even the locals were mostly dismissive of the land. But when visiting a local friend’s hut, he saw a specimen on a shelf that, when he held his light to it, changed colour from blue green to yellow green. This was not something Yianni had seen before, and his gem sense began to tingle.

After digging a trench in the area soon after, the gem guru found more significant samples of the unique stone from his friend’s hut (along with some opal for good measure). And plenty of it. He dug out some specimens and sent them to noteworthy gem labs around the world. There was no definitive conclusion; some claimed it to be blue-green opal, others said chrysoprase, and some defined it as chrysocolla. Yianni firmly believed that they were all wrong. 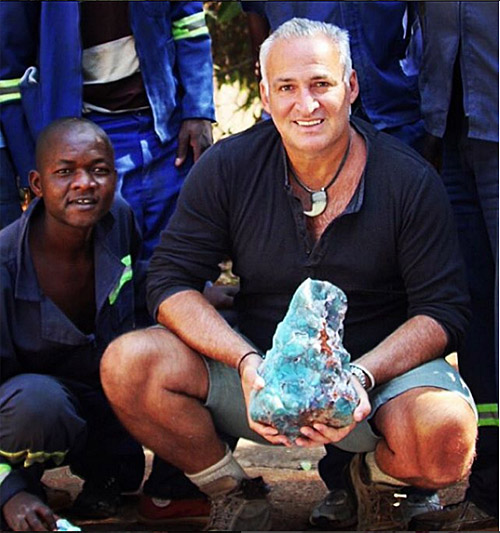 After much bitter debating, he decided to send it to one more lab for a definitive answer; the GIA. Having had a close working relationship with him, surely they would give him an honest answer? Well, they did. And after three months of testing, they were stumped. It was neither chrysoprase or chrysocolla or some weird form of opal; it was an entirely new type of gem that had never been discovered. Yianni had managed to achieve something nobody had done in several decades, if not centuries, of exploration.

So new was this gemstone that the GIA didn’t even have a name for it when publishing its new report. Rather than being egotistic about like some other gemologist (i.e. George Frederick Kunz, who named his newly discovered gem ‘Kunzite’), Yianni went back to his Greek roots when naming his gem. He settled on ‘aquaprase’, with ‘aqua’ meaning ‘blue sea’ and ‘prase’ meaning ‘green’.

So what does aquaprase actually look like? Gemologists liken it to ‘transparent turquoise’, and its colour is certainly unique. But in fact aquaprase comes in two forms; a translucent type much like a typical gemstone and an opaque type that is more baby blue in colour, but changes shade under light and has clouded areas. Both types have proved popular – the former has a colour and quality never before seen, and the latter is favoured for its unique patterns and natural character. 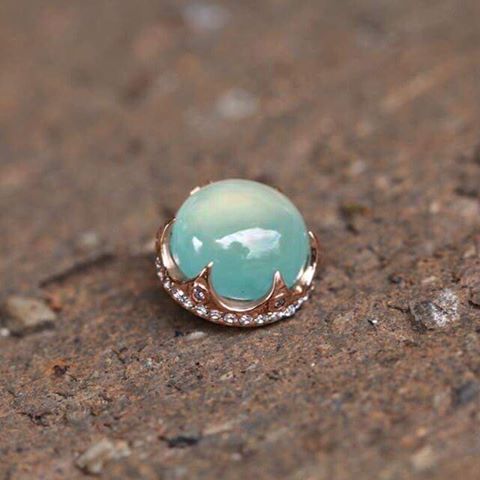 Yianni has set up a mine at the source where he found his first specimens and is buying up each and every stone that emerges from it. While the ‘clean’ stones are used in conventional jewellery, he’s also making use of the ‘cloudy’ stones too; by splitting them in half and creating matching earring sets. He has also vowed never to treat his precious gems in any way because, he says, ‘the industry needs some romance. There are so many articles about treated this and treated that… it needs something that is completely made by God.’

Watch this space for stunning aquaprase engagement rings coming your way some time in the not too distant future.