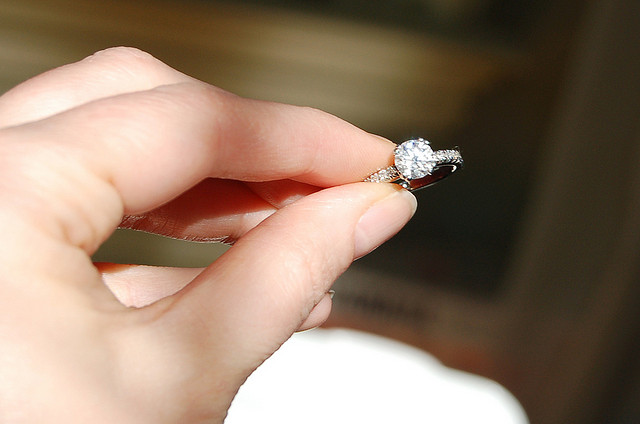 Brides and Grooms are spending more on engagement rings. Does your ring match the national average?

The Knot released their annual Jewellery and Engagement Study, in which they poll over 12,000 brides and grooms in the US on everything from how they plan to proposal to which type of metal they choose for their wedding bands.The most interesting figure from the report however, was how much couples are spending on their special rocks these days.

The average total spend on an engagement ring in the US stands at $5,978. That’s an increase of 11% in just two years. For some people, that may even make the old advertising slogan of a diamond costing ‘2 months’ salary’ a reality!

So, what does this average $6k ring look like?  Here’s a snapshot:

There are also some interesting statistics regarding the purchase of the engagement ring. Men took an average of 4.8 months to research and 3.6 months to purchase, visiting an average of 5 jewellery store visits and considering 25 rings before handing over cash. Brides are getting more actively involved in the engagement than ever before however, participating in the research, dropping hints about style or even picking out the exact ring themselves.

There has been a definite shift towards quality rather than quantity, with 85% of men saying they would prefer a perfect smaller stone to an imperfect larger one.

One final statistic says it all about modern couples when it comes to getting engaged: 68% of brides know the exact cost of their ring. They probably will after reading this post, at least!