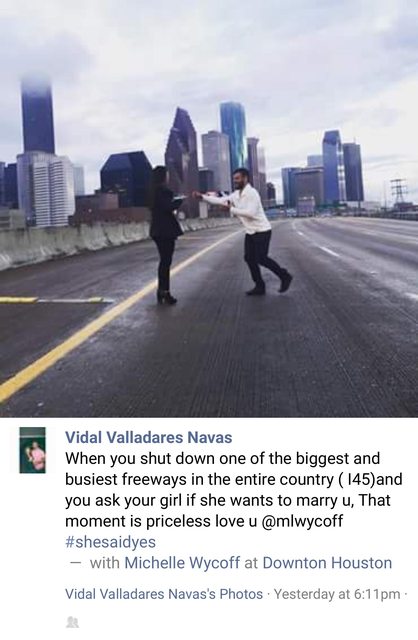 People of the Internet were bemused, confused, and in some cases outraged at one man’s marriage proposal this week…

Vidal Valladares Navas planned what he thought would be an incredibly romantic proposal for his lady love, Michelle Wycoff, in Houston Texas. He chose a beautiful skyline view as a backdrop, researched the best viewing point for it, and enlisted some friends to help ensure they had some privacy when the moment arrived. So far so good, right?

Well, it just so happens that the spot he chose, the one with the amazing skyline view of the city, was in the middle of the I-45; one of Houston’s busiest freeways. His friends came along to block off the freeway with their cars to make sure the couple could have their moment undisturbed.

To give Vidal a little credit, he did choose to pop the question on a Sunday when he figured traffic would be at its lightest. There was also more romance involved than you might think; the view from the freeway is Michelle’s favourite in the city, and on their second date, Vidal had driven her along that very stretch of road on a motorbike to let her enjoy it.

But being one of the city’s busiest thoroughfares, there was still plenty of cars travelling on the road and they were none too pleased at having their journey interrupted for several minutes. Oops.Between the beeping cars and the shock of it all,

Michelle says she didn’t know what to think at first as they stood on the side of the freeway. Luckily she said yes in the end, and the couple quickly got back into their car and moved on. After they learned about the stir they’d caused in the media, Vidal quickly apologised for the inconvenience he’d caused (but we’re guessing he doesn’t really regret it somehow).

Houston police offered their congratulations and said that while they’re happy for the couple, they don’t condone stopping traffic for such an event as it could easily endanger people’s lives. We kind of have to agree with them on that one.

On the Other Hand…

This guy’s certainly got it right first time.

Scottish couple Michael Kent and Fiona Newlands were enjoying a romantic break in Iceland recently. If you’ve ever been to Iceland in winter, you’ll know just how beautiful it is. The pair went for a night-time stroll around the capital Reykjavik, with the streets lined with Christmas lighted, the pathways covered with a blanket of fresh snow, and white powdery snowflakes falling from the sky.

They found a picturesque street leading up towards the city’s most famous landmark, Hallgrimskirkja church. The place was deserted, so Michael decided to seize the moment, get down on one knee in the snow, and propose. It truly was a magical and unforgettable moment, but little did the couple know that a passerby had captured the whole thing in this stunning photo: 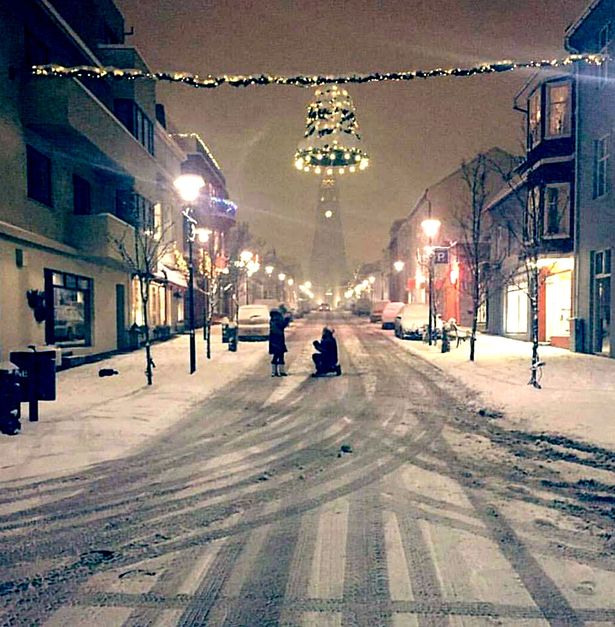 Amazing, right? The woman who took the photo, American photographer Jessica Bowe, thought so to. After giving the couple a few minutes of privacy, she approached them and asked if they’d like to have the photo as a record of their special moment. Of course they said yes (wouldn’t you?), and Michael typed his email address into her phone. However, the freezing temperatures and the adrenalin flowing through his fingers meant he typed the address wrong, and he only realised that he never got Jessica’s contact details after they’d parted ways.

The couple decided to share the story on social media with little hope that they would be reunited with the photo. Michael posted: “Last night I proposed to Fiona Newlands in Iceland. A random woman took our picture as it happened (we didn’t know she was there). In the aftermath I didn’t take the lady’s contact details and I’m worried I gave her the wrong email. If we could find that picture it’d be incredible. If we can’t find it, that’s life I guess, I’m still very lucky.

The Internet listened, and his post was shared over 100,000 times in less than 24 hours! The story eventually found its way back to Jessica and she reunited the couple with their magical photo. They even met again in person, on the same street, to thank her before they left for home again.