Your diamond’s shape is one of the most important style elements of your engagement ring. It can say a lot about you; round diamonds tend to be the classic, traditional choice, princess cuts are a little more contemporary, and so on. But your gemstone’s shape can have an effect on many other aspects of your engagement ring too, like price, its ‘sparkle factor’, and overall design decisions. So we’ve decided to tell you everything you need to know about certain not so obvious diamond cuts. Starting with the ever so beautiful trillion cut diamond…

What is a Trillion Diamond?

For those not up to speed on their diamond terminology, a trillion cut diamond is essentially a triangular shaped diamond. They’re also known as ‘trilliant’, ‘trillian’ or ‘triangular brilliant’ diamonds. This cut was first created in Amsterdam by the Asscher brothers (yes, they also created the asscher cut), and trademarked by the Henry Meyer Diamond Company of New York in 1962.

Although there are a few different variants, trillion diamonds generally have rounded corners and slightly curved sides of equal length. The original trademark design was straight and pointed rather than curved, however. They’re cut from flattened, vaguely triangular shaped rough diamond known as macles, and for that reason normally have a shallow depth.

Basically, trillion cuts can be categorised as either curved or uncurved. Uncurved cuts are more often used as smaller accent stones in engagement rings, while curved stones tend to be the stars of the show in solitaire style engagement rings. 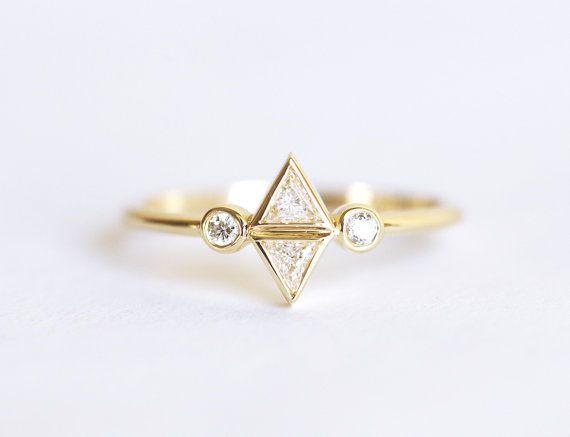 Let’s get the cons out of the way first. If your trillion cut diamond has pointed corners, it’ll need to be protected with a prong or bezel setting. This can be somewhat restrictive in design terms. But then again, with such a statement cut you probably won’t be going for a super ornate design anyway; most trillion engagement rings we’ve seen are pretty simple.

Because they have a shallow depth, trillion diamonds can sometimes lack the brilliance of certain other stones. There’s less space for the light to bounce around in compared to a round brilliant diamond. There is a plus side to this, though; because they’re shallow, they don’t sit too high on the finger and are a great choice for practical brides. Similarly, you’ll need to get your trillion stone cleaned more regularly to make sure it shines bright – just a few specks of dust can dull it’s brilliance.

Trillion diamonds always look a lot larger than they actually are. Remember we mentioned they’re usually very shallow? A one carat trillion diamond can look a hell of a lot bigger than a one carat round diamond, because it’s much wider than it is deep. So if your budget won’t stretch to your ideal carat size, this is a great way to get a cost-effective stone that looks big. 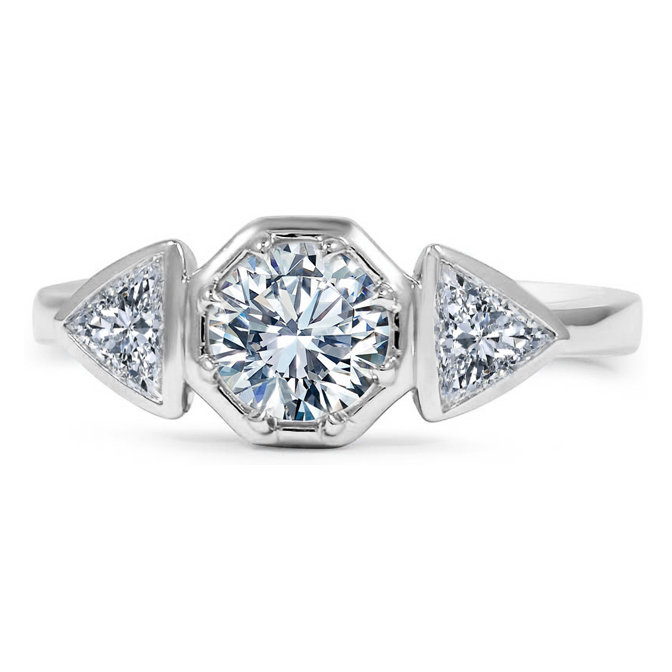 Diamonds may be the hardest natural substance on earth, but believe it or not they can still be chipped; and trillion cuts are one of the most susceptible to this. Those sharp edges need protective settings or they could get damaged, or worse – they could damage you! V-prongs, which wrap around the corner of the diamond, are the way to go.

This is such a unique cut that we think it looks great all on its own. It’s contemporary, has a striking shape, and is certain to get people talking. So trillion solitaire engagement rings are definitely our number one choice, but there are plenty of other options with this stone shape.

Trillion gems make great accent stones for oval, emerald or princess cut centre stones. Another fantastic look we can’t get enough of is a trillion stone set a-symmetrically on the band and paired with a stacked ring that outlines the triangular shape (see below). A tension setting adds an ultramodern, space age kind of feel, or a simple pave band can add that extra boost of glitz and glam.

What Else Do You Need to Know?