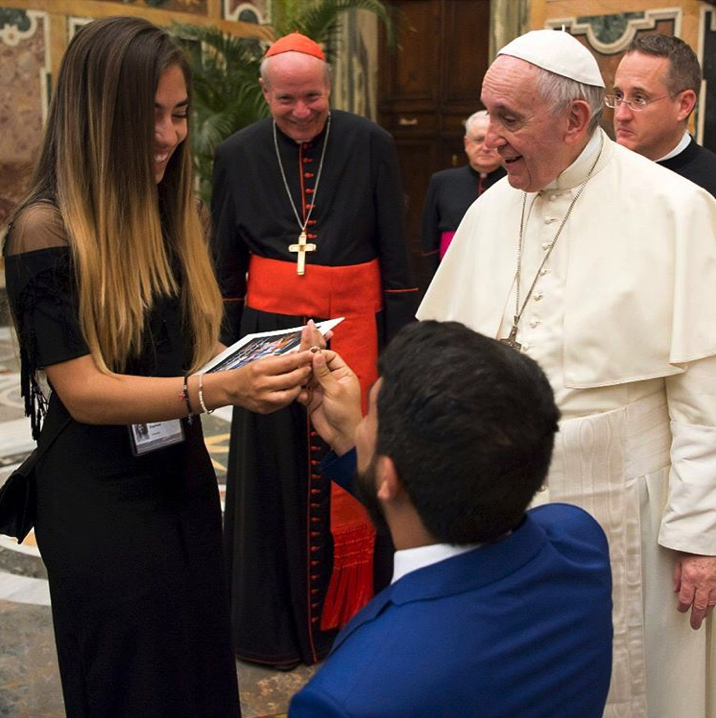 How’s that for an audience?

A proposal in the Vatican city sounds pretty romantic, but this one takes the cake. Venezuelan politician-in-exile Dario Ramirez and his girlfriend Maryangel Espinal were among those in attendance of an audience with the Pope himself back in August. Ramiro is a human rights activist and politician who fled the Maduro regime in Venezuela in 2014.

After rubbing shoulders with important Catholic legislators, Ramirez and Maryangel got their opportunity to talk to the Pope for a few moments about the situation in Venezuela and the plight of political prisoners. Then, unbeknownst to both the Pope and Maryangel, Ramirez decided to seize his chance to ask a very important question. In his own words:

“I then said to the Pope: there’s a third thing I want to ask you. I explained to the Holy Father that the woman next to me is the woman of my life. I met her in church, God put her in my life, and I want to propose to her. So I got down on one knee and asked.”

The crowd around them burst into applause, while the Pope smiled and Maryangel seemed a little lost for words. Then the Holy Father piped up, saying “He asked you to marry him, what do you say?” Once Maryangel accepted, he then gave the happy couple a special blessing before getting on with the rest of his day.

Apparently Ramirez had to obtain prior approval at Cardinal level for the proposal so it was all meticulously planned, but both the Pope and Maryangel were none the wiser. It takes courage to ask someone to marry you in the first place, nevermind in front of one of the most famous people on the planet, so Ramirez, we salute you.

Congrats to Dario and Maryangel!