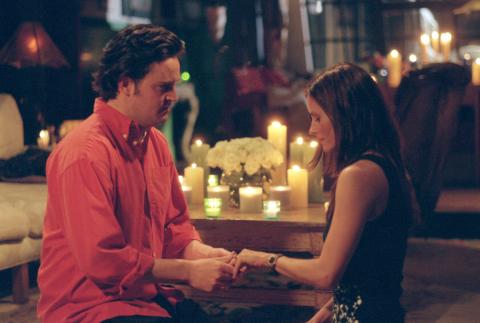 There are times when we kind of wish our lives were just like the movies; always beautifully lit, with flawless dialogue and magically romantic scenes. Whether you’d like to admit it or not, every lady has a dream of a movie magic style proposal, be it a huge romantic gesture or a sweet and simple moment. Here’s our favourite marriage proposals from the perfect world of movies and television… Love Actually

Classic rom-com heartthrob Colin Firth plays the bumbling and slightly grumpy writer Jamie Bennett in this multi-storyline British classic. He falls in love with his Portuguese housekeeper Aurelia, who can’t speak English, while he finishes his novel on a retreat. Afterwards, he learns just enough of her language to propose in the restaurant where she works, accompanied there by an enthusiastic mob of her family and neighbours. Little did he know she had been learning English too in order to tell him how she really feels. The resulting proposal, complete with terrible grammar, will make your heart melt.

‘When you realise you want to spend the rest of your life with someone, you want the rest of your life to start as soon as possible.’ That’s how Harry tells his long-time friend Sally that he’s in love with her in his sort-of marriage proposal at the movie’s climax. It answers the age old question that this movie is all about; can a man and a woman ever just be friends? The answer in this case is no, not really, but that’s not a bad thing! We love the sentiment, and we love how he presents the idea to her, and we love her reaction. Basically we love everything about this movie! 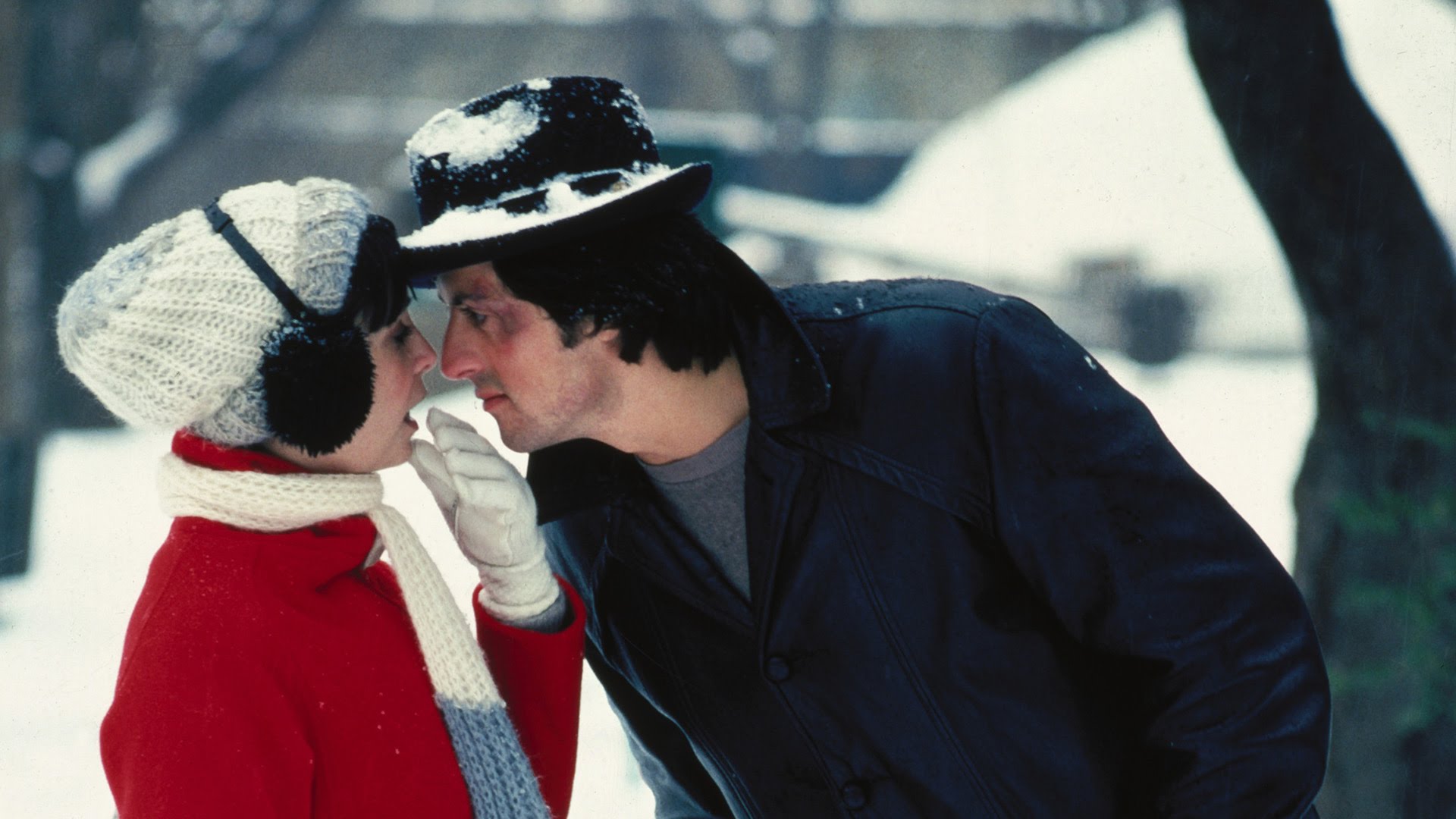 Rocky isn’t exactly a romantic comedy, but it has one of the sweetest love stories we’ve seen on the silver screen. The underdog southpaw boxer Rocky Balboa (Silvester Stallone) overcomes all the odds and beats the champion Apollo Creed in the first movie, winning the heart of the shy but fierce Adrienne in the process. In the sequel, they go on a date to the zoo after Rocky is released from hospital. With snow falling all around them and a tiger looking on, he simply says ‘I was wondering if you wouldn’t mind marrying me very much’. Adrienne’s response is equally adorable: ‘Yes, I’d like to marry you.’ Naturally, the tiger is the first guest to be invited to the wedding.

If you turned on a TV at all between the mid-90s and mid-00s, you probably watched friends. Everyone knows the love story of Monica and Chandler. The unlikely couple got together for a one night stand at Ross’s wedding, and it turned into a beautiful relationship. After a miscommunication that resulted in them almost breaking it off, Monica filled their apartment with candles and prepared to propose to Chandler herself. Chandler got there first however, and the scene plays out in a truly emotional and (for once, where movies and TV are concerned) realistic way. There are tears, awkward moments, and even a little bit of laughter – just like a real proposal.

Of all the TV couples to hit our small screens, Jim and Pam from The Office are our absolute favourite. Both the other characters in the show and audiences watching willed them to get it together for years. When it finally happened (in secret), we had a hard time stopping ourselves from jumping for joy – literally! In true Jim style, he conducted a series of fake proposals to psyche Pam out before the real one, which eventually happened in a gas station in the rain. It has an air of unsophisticated romance, which perfectly suits this low-key, fun loving couple. We love them so much we kind of wish they weren’t fictional.

Gone with the Wind 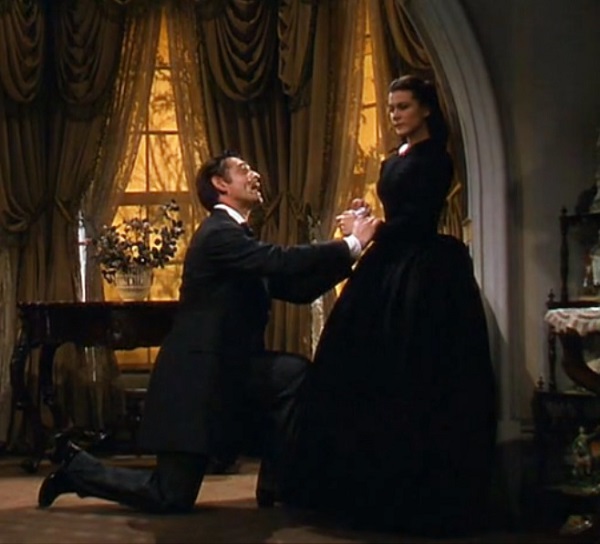 Gone with the Wind’s Scarlett O’Hara lived a tough life. Over the course of the movie she endures civil war, sees her home town destroyed, loses three husbands and goes from being rich and respected to poor and starving. Rhett Butler is there throughout and learns to love her just the way she is, something nobody else could do. When she finally hits rock bottom and resorts to downing whiskey after whiskey, Rhett turns up and tells her he ‘can’t go all my life waiting to catch you between husbands.’ Scarlett retorts ‘I’ll never marry again’, and Rhett insists ‘oh yes you will, and you’ll marry me.’ Cool as a cucumber! Who could resist?

We adore the real life love story of Johnny Cash and June Carter, but with the sweet and romantic twist it gets in the movie adaptation of their lives, it’s even better. Johnny was hopelessly in love with June from the moment he met her (and long before that too), and proposed to her multiple times. Each time she said no. Finally, he stopped mid-way through a performance of ‘Burning Ring of Fire’, a song June wrote, to ask her one last time. ‘I’ve asked you 40 different ways and it’s time you come up with a fresh answer. I’m asking you to marry me. I love you, June. Now I know I said and done a lot of things, that I hurt you, but I promise, I’ll never do that again. I only want to take care of you. You’re my best friend. Marry me.’ If that doesn’t make your heart melt, nothing will!

Again, this isn’t a show most people associate with romance! But the story of how Homer proposed to Marge is beautiful, in a typical Homer Simpson kind of way. After his planned proposal went awry he used an an onion ring from the kitchen he worked instead of a real diamond, attempting to make it more sophisticated by declaring ‘pour vous’. Marge simply replied ‘any ring is fine as long as it’s from you’. Aww!

Sex and the City

While Mr. Big’s proposal to Carrie (using a diamond encrusted Manolo Blahnik shoe instead of a ring) is the most well known from this long-running TV series, it’s a different one that made our hearts melt: Miranda and Steve. This couple is the epitome of ‘opposites attract’ – an accomplished lawyer who likes to take control and a happy go lucky barman with no sky-high ambitions. In a move that’s perfectly suited to their relationship, Miranda proposes to Steve, more or less out of the blue. They seal the deal with a kiss, and that’s the job done!