It’s almost as difficult as finding a needle, trust us…

Lynn Stevenson tested out the old saying of ‘finding a needle in a haystack’ for real a few months ago. Except instead of a needle, it was her wedding band and engagement ring! Stevenson was enjoying a family day out with her husband and daughter at Briarlands Farm in Stirling, Scotland. As she played in the hay with her little girl, she felt the rings slip off her finger and bounced off her boots. Nightmare!

Luckily Lynn’s husband came to rescue and found her wedding band after a quick 20 minutes of searching. But unfortunately the engagement ring was nowhere to be found, probably buried further and further in the hay as they searched for the first ring. She had almost lost all hope of finding it again.

The farm staff refused to let Lynn go home without her ring, however. They started sifting through piles and piles of hay with their bare hands, but to no avail. Then they borrowed metal detectors to search bigger areas with more accuracy – still no joy. As it got dark, they even donned head torches so they could continue their search. 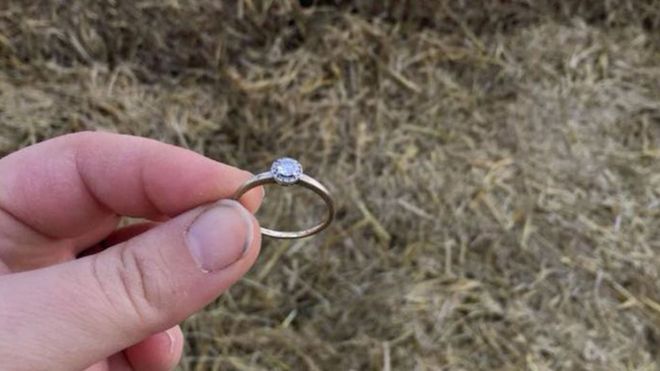 After calling off the search for the night, Lynn and farm staff member Mary Inglis returned in the morning for one last try. They starting dropping piles of hay into buckets, listening for a telltale rattle of metal inside. They found a handful of coins, but still no ring. About to give up, Mary stuck the metal detector into the last corner they had yet to investigate.

Guess what – the metal detector beeped! Picking up a handful of hay thinking it would be another coin, Mary plopped it into the bucket and heard a clink of metal. She fished out the object, and…. It was the engagement ring! “I was just so relieved and happy to find it. The staff could not have done more to help. They were fantastic” Lynn said.

She also vowed to get her rings resized so that she never has to get such a shock again. Good idea, Lynn!