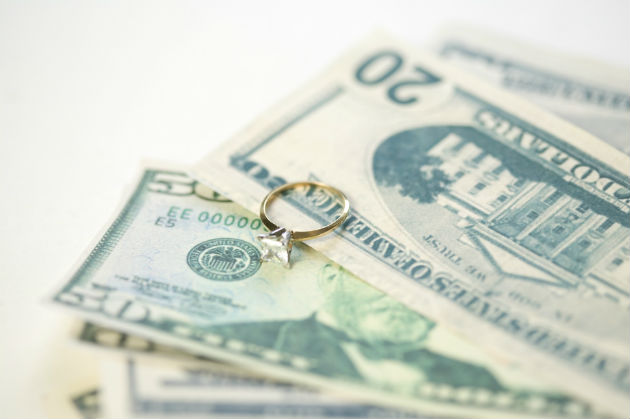 It’s the question that has confused, shocked, and brought a sense of dread to couples all over the planet for generations… But we have the answer!

Unfortunately however, there is no simple answer. The amount you spend on an engagement ring is a subjective decision and depends entirely on your tastes, where you buy, when you buy, and of course, your income. Couples in the US spend an average of $5,978 on their rocks – but remember that’s a hugely varied population in every aspect.

In contrast, a survey released recently stated that 36% of people in the US believe you SHOULD spend less than $1000 on an engagement ring. Another 19% upped their figure to between $1000 and $3000. That’s over 50% of the total number of people surveyed, and in our opinion it’s a much more accurate indication.

For argument’s sake, let’s take a look at the $1000 – $3000 price tag and assume we’re in a mid-range, not too expensive jewellery store. Where on that spectrum should your dream ring be? It depends on a lot of factors, like…

Stones. If you’re in the market for a single solitaire diamond, the $1000 end of the scale will get you under 1 carat – usually somewhere between. 0.25 and 0.75 ct – on a standard white or yellow gold band with no detailing. Good quality 1 carat diamond solitaire rings start at a minimum of $2000; coloured stones are usually a little cheaper. As you add side stones, pave or halo settings, the price will go up accordingly. You’d be lucky to get a 1.5 carat diamond for $3000, but never say never.

Metal. White and yellow gold are the cheapest metals around, and are usually the least expensive part of the engagement ring. At the other end of the scale is platinum – a plain platinum wedding band costs in the region of $1000 alone. Purely because it’s so popular right now, the price of rose gold can be bumped up by some not-so-honest jewellers. Suprisingly for some, titanium, palladium, tungsten and other up-and-coming metals tend to be at the lower end of the scale.

Cut. The round brilliant cut is the most widely available and therefore usually the cheapest. Other shapes like princess cut and emerald aren’t too far off, but more unusual shapes like marquise, pear, cushion or asscher cuts come with a price hike. Leaving the shape behind however, the actual cut (meaning the proportions) dictates the price to a large extent. It’s possible to find a large stone with a $3000 price tag, but the cut will most likely be inferior and won’t refract the light as well as a smaller, more expensive stone would.

Where You Buy. There’s no doubt about it; engagement rings from online retailers are cheaper, often by as much as 20%. The downside? You need to be extra vigilant about the jeweler’s reputation, and you usually can’t see the ring before you buy. Depending on where you live and how much you can spend on flights, you may actually save money on a ring by travelling to another country and availing of duty free shopping. Check out Dubai or Antwerp for a start.It goes without saying that the luxury brands out there are often the most expensive though, no matter what the country.

And just for a final comparison, we conducted a test between some US jeweller’s online sites. Here’s how much you’ll pay for a 14-karat white gold, 1 carat diamond ring with no funny stuff.