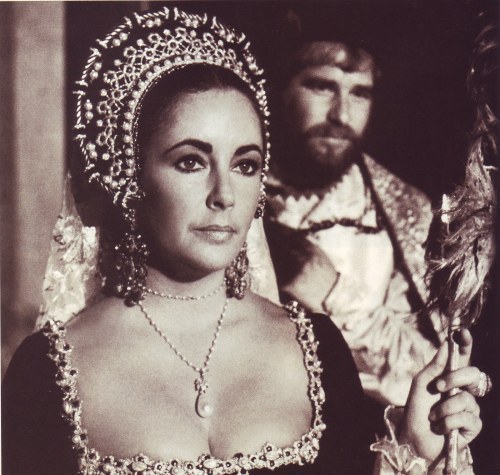 Your diamond engagement ring may be the most beautiful thing on the planet as far as you’re concerned, but there are plenty of gemstones known all over the world for their record breaking status or intriguing histories.

From cursed diamonds to gigantic pearls to the gemstones of the rich and famous (and royal), here are 10 famous historical gemstones and their weird, wonderful and sometimes sinister backstories… 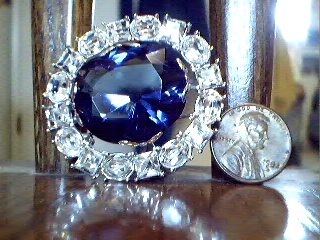 The Hope Diamond is one of the most famous gemstones in history, and for more than one reason. It emerged from the Kollur mine in India in the 17th century, originally part of the larger Tavernier Blue diamond which was then cut into multiple stones. It has trace amounts of borom atoms, giving it a deep blue hue, and weighs in at 45.52 carats. Its owners have included France’s King Louis XIV, the UK’s King George IV, US socialite Evalyn McLean, and jewellery tycoon Harry Winston.

Now for the fun part. The Hope Diamond is believed to be cursed. While the rumour was probably cooked up by sellers over the years to create hype around the gem, there are some tentative links to the ‘curse’, which is that it brings misfortune and tragedy to anyone who owns or wears it. Many of its owners have died by suicide, murder, hanging, were imprisoned or abandoned, and one was chased down and killed by an angry mob! So basically, don’t ever buy the Hope Diamond. 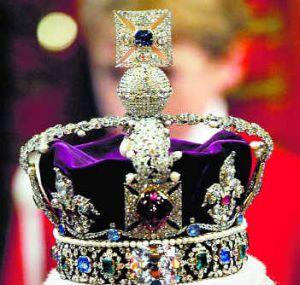 The Koh-i-Noor, or ‘Mountain of Light’, is another diamond from an Indian mine that is rumoured to be cursed. Mined in the 13th century as a huge chunk weighing 793 carats, it was cut down to 105.6 carats in 1852 when Queen Victoria’s husband, Prince Albert, decided he was unhappy with its dull appearance. The flawless and colourless diamond was later set into the front of the Queen Mother’s crown and is on display in the Tower of London.

So where does the curse come in? Well, the history of the Koh-I-Noor comes with lots of ownership disputes, some of which lasted a very long time and caused a lot of trouble on all sides. At this point in history, it just so happens that all of these rulers were men. So since it arrived in England, the only monarchs and royal family members to ever wear the jewel have been female.

The Star of Africa 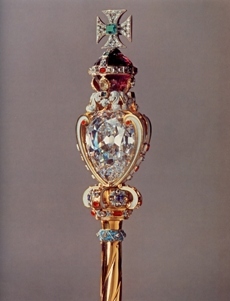 Also known as the Cullinan Diamond, this 3,106.75-carat monster rock was discovered in Pretoria, South Africa, in 1905. At the time, it was twice as large as any diamond ever found and gemologists reported that it was most likely just a fragment of an even larger stone. It was cut into nine smaller gems (imagine wearing over 3,000 carats!), the largest of which was the Great Star of Africa.

The Prime Minister at the time suggested that the stone be presented to King Edward VII as a token of support and loyalty between South Africa and the UK, But with the Boer War having recently ended, the vote was controversial. 42 were against the presentation and 19 were in favour, so it was left to the King to decide to accept or not. Winston Churchill persuaded him to accept, and for his efforts was rewarded with an exact replica. When the diamond made its way to the UK it was sent by registered post in a simple, inconspicuous package while a steam boat with a locked safe and 24 hour security carried a fake, as a decoy! 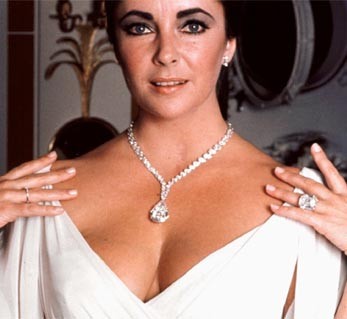 The Taylor Burton Diamond began its glamorous story in the Premier Mine in South Africa in 1966. It weighed 241 carats as a rough diamond and was cut down to a 69.42 carat pear stone. Its first owner felt unsafe wearing it around her native New York City and decided it someone else would enjoy it more. It went up for auction in 1969, and among the bidders were Harry Winston, a representative from Cartier, and one Richard Burton.

Burton was outbid by Cartier, who secured the diamond for $1,050,000. Despite Elizabeth Taylor (Burton’s wife, just in case you didn’t know) saying she didn’t mind, Burton was determined to get it for her and insisted Cartier sell it to him. He allegedly said he ‘was going to get that diamond if it cost me my life or 2 million dollars, whichever was the greater’. Cartier gave in, and Taylor had the diamond made into a stunning necklace specifically designed so that the diamond would cover her tracheotomy scar. 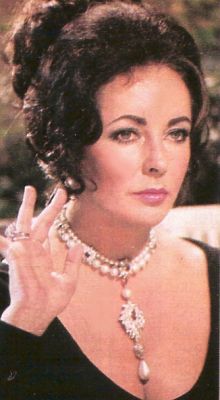 ‘La Peregrina’ is the Spanish word for ‘pilgrim’ or ‘wanderer’, and it certainly fits the history of this 55.95 carat, perfectly symmetric pearl. It was discovered by an African slave on the Gulf of Panama island of Santa Margarita in the mid-16th century. The slave was rewarded with freedom for the discovery, and the Pearl passed through the hands of several Spanish and British royals for the next 300 years.

In 1969 La Peregrina finally appeared at a Sotheby’s auction, and who bought it? Richard Burton, as a $307,000 Valentine’s Day gift for Elizabeth Taylor. La Peregrina apparently lived up to its name; not only did it wedge itself between a sofa at Windsor Castle and go missing during a ball at Buckingham Palace over the course of its life; it also disappeared from Taylor’s grasp in a hotel suite. The terrified icon found it several minutes later in the mouth of her puppy, who thankfully hadn’t gotten around to swallowing or chewing it yet!

The Star of India 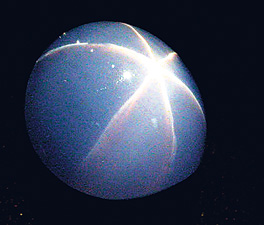 The Star of India is one of the rarest gems in the world. For a start, it’s a sapphire that weighs in at 563.35 carats. Secondly, it’s a star sapphire; unlike the usual deep blue transparent variety, star sapphires are opaque and display a 6-point star under direct light. But the Star of India goes one better than this; it displays TWO stars, one on each side .And to add another layer of mystery to the story, the Star of India’s early history is completely unknown. It first cropped up at the 1900 Paris Exhibition but was likely mined some 300 years before that. Nowadays, it sits in the American Museum of Natural History in New York City.

The most unbelievable aspect of the Star of India’s story however occurred in 1964. Two thieves unlocked a bathroom window on a visit to the Museum during public opening hours, then returned that night and climbed in through the window. The Star of India was the only gem in the entire collection protected by its own personal alarm. And by either a stroke of incredible luck or a gigantic human error, the alarm’s batteries were dead that night. The thieves made off with the Star and several other valuable gems only to be caught 2 days later – but they had already handed them off. A few months later, they eventually confessed and the gems were recovered in a bus locker in Miami. The Star of India went back to its home at the Museum and has been under strict guard ever since! 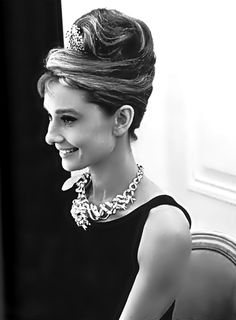 Diamonds may not be every girl’s best friend, but they’re certainly a good friend of jewellery giant Tiffany and Co. In 1878 Charles Tiffany purchased one of the largest yellow diamonds ever discovered. It came from the Kimberley mine in South Africa, weighed 287.42 carats as a rough stone, and Tiffany’s gemologist studied it for a full year before beginning to cut and polish it. Eventually it ended up as a 128.54 cushion cut stone.

The gemologist, George Frederick Kunz, was just 23 years old and had only just started working at the firm. He cut the stone with 90 facets instead of the usual 58 to add to its brilliance. It was a bold move, but one that paid off. The stone went on to be Tiffany’s most prized collection piece and was displayed all over the world. When the movie Breakfast at Tiffany’s was released, Audrey Hepburn was granted permission to wear it during press events.

The Pearl of Lao Tzu 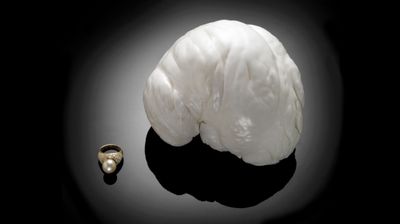 This particular pearl isn’t like anything you’ve seen before. It weighs 6.4 kilograms for a start, and since it comes from a giant clam rather than oyster it doesn’t have that shiny iridescent quality most people associate with pearls. Nevertheless, it has an interesting history.

The Pearl was discovered by a Filipino diver off the coast of the island of Palawan, who gave it to the local tribal chief. An American named Wilburn Cobb eventually claimed it for himself after he saved the chief’s son’s life, and discovered the Pearl’s unusual – and unconfirmed – history. Cobb claims that it had first been grown in a much smaller clam around a piece of jade, as commanded by the legendary Chinese sage Laozi 2500 years previously. It was transferred over centuries to even larger clams until it grew so big that wars were fought over its ownership. It was taken to the Philippines for safe keeping, but was tragically lost in a storm. Is it true? Who knows! 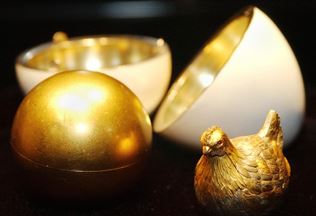 It’s not exactly jewellery, but no list of famous gems could be complete with a mention of the Faberge Egg collection. These large ‘eggs’ crafted from precious metals and encrusted with jewels were created by Peter Carl Faberge at the turn of the 20th century for the Russian Tsars Alexander III and Nicholas II. 50 ‘Imperial’ eggs were made, each more elaborate than the last, and a further handful were designed for other equally noble clients.

The first was made for Alexander III who gave to to his wife as an Easter and wedding anniversary gift in 1885. It was inspired by a similar egg the empress’ aunt had owned, and was made from gold with a white enameled shell. This shell opened to reveal a golden yolk, which had a multicoloured golden hen inside. Inside that was a miniature replica of the imperial crown and a ruby pendant. How’s that for an anniversary gift? The Empress was so delighted that the Tsar commissioned Faberge to be the Imperial Crown’s dedicated goldsmith, and he spent the next two decades designing and building elaborate jewelled eggs for them, until the Russian Revolution put a stop to pretty much everything.