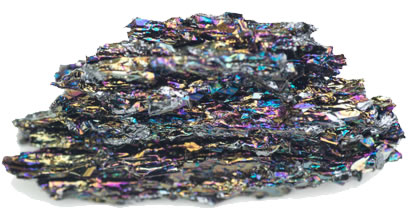 The jewellery world is abuzz with the word ‘moissanite’ these days, especially when it comes to engagement rings. Essentially, moissanite is the closest possible alternative to real diamond; so close that even expert jewellers can’t tell the difference sometimes. There’s a lot more to it than that however – here’s what you need to know about this sparkly diamond alternative…

Update: Trying to choose between Diamond or Moissanite, check out our guide here.

Moissanite was discovered in Arizona in 1893 by Henri Moissan, a French scientist who would go on to win a Nobel Prize for Chemistry. He found his sample in meteorite crater. That’s a big deal, because naturally occurring moissanite is an extremely rare find as Moissan would soon realise. Technology advanced over subsequent decades however, and scientists achieved the significant feat of creating moissanite and other minerals – even diamonds – in a lab environment. These lab-created stones are exactly identical to their naturally occurring counterparts. There are only two differences; the environment in which they were created (in a lab vs. under the earth’s surface) and the time they take to form (a few weeks vs. millions of years!). As far as their composition, appearance and other properties are concerned, both versions are 100% identical.

So it’s NOT the same as diamond?

Here’s where the fun starts. Diamond is made from carbon and is the hardest, most durable naturally occurring substance on earth. Moissanite however is made from silicon carbide and while not as hard as diamond, is still more durable than rubies, sapphires and emeralds. To put it another way, the hardness of gems is measured on the Mohs scale. On this scale, diamond sits at 10, moissanite sits at 9.25, and sapphire and other precious gems at 9. This means that it’s almost impossible to scratch or chip moissanite – in fact, it will most likely chip and scratch the things it comes in contact with instead, just like diamond. The chemical make-up of each is quite different, but the overall appearance is remarkably similar. 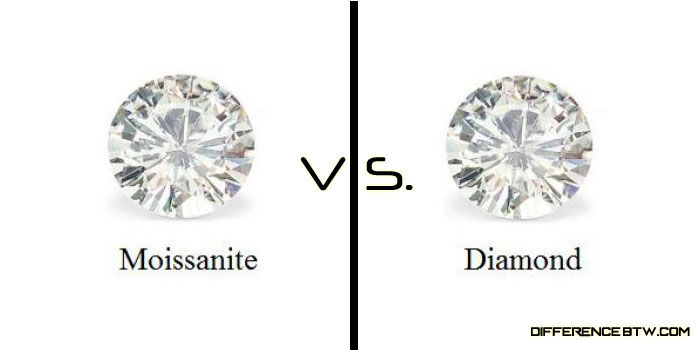 How Do you Tell the Difference?

We’re talking about very, very, minor and extremely subtle th
ings that would be in no way obvious to the untrained eye, but there are a select few differences between moissanite and diamond. The first is ‘brilliance’, or the amount of light and contrast a stone has. Diamonds and other gemstones sparkle because they refract light at certain angles and in certain directions. Diamonds are of course known for their sparkle factor, but contrary to popular belief moissanite actually has more brilliance than diamond. In sunlight it can have a rainbow or glitterball effect, which many people find more attractive than diamond.

The second difference is colour, or lack thereof. Diamonds range
from colourless to having a brown or yellow tint. Colourless diamonds however are just that – there is no trace of any colour whatsoever. Moissanite on the other hand can sometimes project a very slight yellow or grey hue – even when deemed to be colourless – in certain lights.

Finally, there’s one hell of a big difference between moissaniteand diamond – price. Depending on where you shop you can pay just 1/10th the cost of a diamond for a moissanite stone of similar clarity, colour, carat and cut. Diamonds come with a long standing reputation that has inflated prices enormously over the years – and it was all the work of a clever marketing ploy by DeBeers back in the 1930s. Moissanite comes with no such hype, and is priced accordingly.

So What’s All the Fuss About?

Moissanite is cheaper and more brilliant than diamonds, for sure. But that’s not all it has going for it. The lower price offers much more flexibility than you would have if you bought a traditional diamond engagement ring. You can add in custom made design elements, choose some extra stones, go for a more ‘upmarket’ metal like platinum, or even get the whole thing custom made from scratch and still save on money. Or like an increasing number of couples you could opt for a standard design and use your chunk of savings for something like a downpayment on a house, a once in a lifetime honeymoon, or other practical but no less romantic things.There’s also environmental and ethical concerns. Making moissanite does not require any mining or using up of the earth’s precious natural resources like naturally formed diamonds do. There has been much controversy surrounding ‘conflict diamonds’, i.e. the illicit trading of diamonds mined in war zones, with the proceeds used to fund the conflict. Again, moissanite has no such stigma (although to give credit where it’s due, many countries have passed laws to stem the importing of conflict diamonds).

And finally, there’s the space story. Although the vast majority of moissanite on earth is man made, in space there is a plentiful supply of it. All of the naturally occurring moissanite on earth was deposited by meteors, so the stone has earned itself a reputation of being futuristic, otherworldly, and an ideal choice for lovers of sci-fi, astronomy, or anything a little bit ‘out there’.