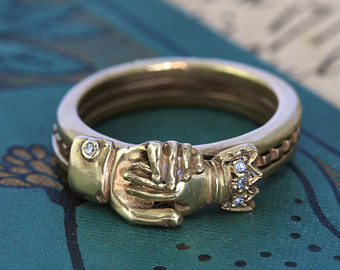 There’s a big trend these days among engaged couples to add personal touches to the engagement ring, the wedding bands, or both. From simple engraved messages on the underside of the ring to all out custom-made pieces,there are plenty of options. We bet you didn’t know this practice has been going on since forever though. Ever hear of gimmel rings?

Gimmel rings were at the height of their popularity in the 1600s. The custom of men and women wearing rings as a symbol of their betrothal had already been long established (as far back as the Ancient Romans, believe it or not!), so by the Middle Ages certain specific traditions and fashion trends were making themselves known. Some proved to have plenty of staying power (like wearing additional wedding bands after the ceremony), while others came and went and were forgotten among the pages of history books.

The name ‘gimmel ring’ comes from the Latin word ‘gemellus’, which means ‘twin’. Long story short, a gimmel ring consists of two interlocking hoops that when connected form one single (fancy) ring. Think of it like a ring that’s been split in half right down the middle to make two half-size rings. 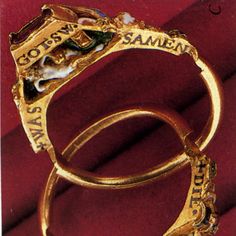 Traditionally the bride and the groom would receive one hoop each at the time of their engagement. When the wedding day arrived, the two rings would be joined as one. Nice and symbolic, isn’t it?

The diverse choice of designs among surviving gimmel rings is quite frankly astonishing, and makes for great creative inspiration for anyone looking for that personalised twist. Common designs include a clasped hands motif; one hand on each ring that come together when the ring is interlocked. Another was the heart and hand design; one ring had the hand and the other the heart, and when joined the hand falls over the heart for protection.

One of the best examples of a gimmel ring sits inside the Metropolitan Museum in New York City, It dates from 1631 and is German in origin. It features elaborate symmetrical metalwork with one ring topped with a ruby and the other a diamond. When it’s broken apart the ruby ring has the Latin inscription of ‘Whom God has joined together’ and the diamond part has ‘let no man tear asunder’. It’s also got a symbol of life and death known as a ‘memento mori’ – one side has a tiny baby and the other a skeleton… but let’s focus on happier thoughts here!
So who got to wear the joined gimmel ring once the marriage had taken place? The custom was for the wife to take on that challenge, although other records claim that one half was given to a person from the couple’s past as a reminder of where the began, while they kept the other half as a reminder of their future together.