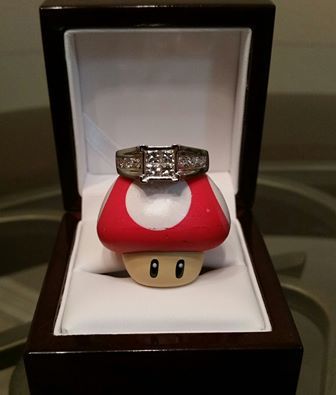 Take a break and watch the cutest thing you’ll see all day. (If you’re a gamer, this is essential viewing).

If you’re a fan of Super Mario or video games in general you probably already know this, but for everyone else; did you know you can create your own levels with Super Mario Maker? We did not, and our mind is now blown. But there’s more than one reason why.

Shane Birkinbine is pretty much a tech genius, so making his own Super Mario level with Mario Maker was an easy task. It’s what he did with it that made him a little nervous, to say the least.

Shane made a custom level just for his lovely girlfriend Pam Edwards and watched (and filmed) while she played it for the first time. Pam proves to be a dab hand at progressing through the game, but Shane offers advice and commentary anyway. When she’s almost at the end, she notices that Shane has spelled out her name in boxes.

She already thinks that’s pretty amazing as it is, but then she reads the rest of the message; ‘will you marry me?’ Screams of joy, excitement, amazement and thankfully a ‘yes of course!’ ensue.

But it doesn’t end there! Shane also presented Pam with a beautiful diamond engagement ring, which sat on top of a classic Mario mushroom inside the box. We have to say this is one of the cutest, most creative and happiest proposals we’ve seen in a long time.