Skip to content
Home Guides What Is An Ashoka Diamond?

Reese Witherspoon has one, so they’ve got the Hollywood seal of approval…

Most people know what a round brilliant diamond is, and a princess diamond. Plenty know what a marquise diamond is too, and some even know what asscher, cushion and trillion diamonds are. They all refer to the shape of the stone. While the above are all relatively common diamond cuts or shapes these days, ashoka cut diamonds are pretty rare.

The ashoka cut is named after Ashoka Maurya, a famed emperor in ancient India who ruled most of the subcontinent for over 50 years in the 3rd century. The ‘original’ ashoka diamond weighed 41.37 carats, was graded D in colour (the best possible) and was internally flawless, though any more hard facts about this stunning gem are hard to come by.

Anyway, ashoka cut diamonds are exceedingly rare because it takes a large, elongated chunk of rough diamond to cut them from. Fewer than 10% of gem-quality diamond has the potential to become an ashoka cut. The ashoka shape is kind of like a longer cushion cut – in other words, a rectangular shape with rounded corners. It has also 62 facets – four more than the standard round diamond.

In the modern era, the ashoka cut diamond has been perfected by diamond dealer William Goldberg, who just so happens to be the man behind Reese Witherspoon’s ring. Because the shape of rough diamond needed to create an ashoka diamond is hard to come by, and since Hollywood’s celebrities have them on their fingers, it shouldn’t surprise anyone that these gems ain’t cheap. 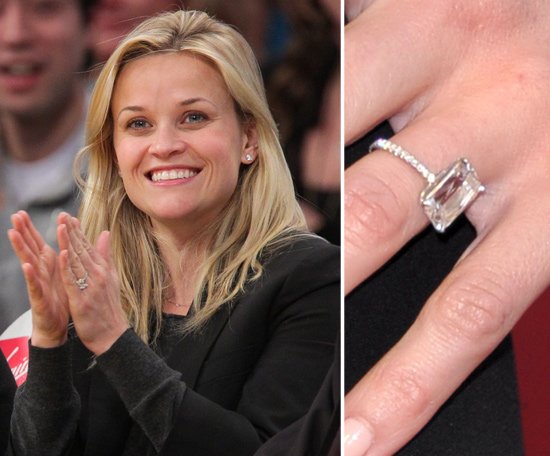 Aside from the William Goldberg family business, where you can buy a replica of Reese’s engagement ring among other luxurious pieces, you can also get ashoka diamonds exclusively from Boodles in the UK. An ashoka solitaire engagement ring has a starting price of £3700 on their website (around $5200). They also have three-stone designs, halo designs, eternity rings and ashoka solitaires with pave bands… among many other irresistible pieces.

So what about Reese’s ashoka ring? She got hers from husband Jim Toth, who proposed back in 2010 after almost two years of dating. They married in 2011 and Jim is now a doting step-father to her two children, son Deacon and daughter Ava. The design is pretty simple, letting that beautiful and rare diamond do all the talking. It features a four carat ashoka diamond in a solitaire style, with a little extra glitz added into the mix with small pave diamonds running down the band. It’s set in platinum.

To our knowledge, no other celebrity has an ashoka engagement ring, so Reese’s bling really is one of a kind – except for those replicas available from William Goldberg, of course.