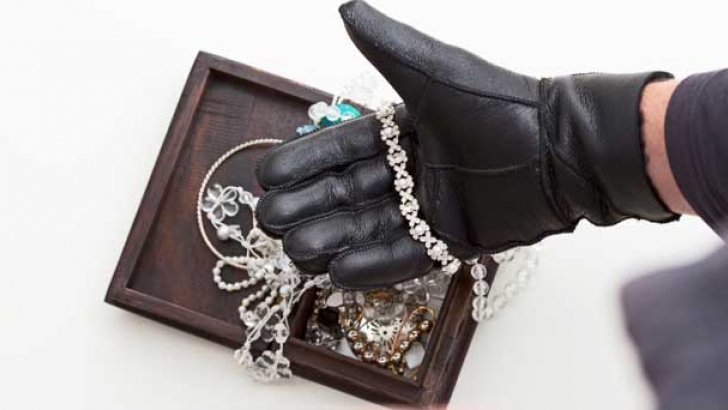 Not too keen on spending your life savings on an engagement ring for your significant other? Take a leaf out of the history book and brainstorm how you can pull off a crazy jewellery heist like one of these. Or, you know, don’t, because you’ll go to jail.

In April 2015, a group of seven retirees with an average age of 63 (the mastermind of the group was 76 years old!) broke into a security deposit vault in Hatton Garden in London. The area is known for its high end jewellery shops, so it doesn’t take a genius to figure out what was stored in this security deposit vault. The men had been pulling off thefts for decades around London, and figured out a pretty nifty way to bypass the high security vault door; by climbing down an elevator shaft next to it and then drilling a hole in the 50 centimetre thick wall.

The gang made of with £200 million of precious gems and jewels, and although all of them were caught and jailed, the jewels have never been found. If you like the story, you’ll be glad to know a feature film called King of Thieves, starring Michael Caine and Ray Winstone, has just been released about it.

Way back in 1671, before security cameras and forensic detective work was a thing, an Irishman by the name of Thomas Blood sort-of successfully stole the Crown Jewels from the Tower of London (yes, the big stone fortress surrounded by a moat). A colonel by day, he posed as a mild-mannered pastor with a mild-mannered wife, who was in fact a prostitute he hired. After several visits he managed to somehow persuade the Tower Master to give him and three accomplices access to the jewel vault. After clubbing and binding the Master, he sawed the Royal Sceptre in half, flattened St. Edward’s crown and stuffed the Royal Orb down one of his accomplices’ underpants.

The escape didn’t quite go as planned – the sceptre got left behind, one guard was shot and, obviously, Blood was caught in the act. However, when he stood before the King in chains, he looked so remorseful that he ended getting a pardon and his own plot of land back in Ireland. The phrase ‘luck of the Irish’ is famous a reason!

Whether you love or loathe the Kardashians, you’ll probably have heard about this particularly drama-filled moment in Kim Kardashian’s world. The reality TV star was attending Paris Fashion Week in 2016, staying at a private residence and surrounded, as always, by an entourage of people including a personal bodyguard. During one of the few and very brief moments when she was left entirely alone in her room, five men entered the property, tied up the building’s security guard, dragged Kim out of her room and tied her up too, then made off with an estimated $10 million of her jewellery.

The loot included her $4 million diamond engagement ring from Kanye West as well Cartier bracelets, Lorraine Schwartz earrings, and a Rolex watch among other items. The only piece to be recovered was a $30,000 diamond encrusted cross, which was found by a passer-by near the crime scene. It was the biggest robbery of an individual in France for 20 years, and so far ten people have been arrested in connection with the crime. Kim’s jewels have yet to be found, but police believe some of them were sold in Belgium.

As the single most glamorous event in Hollywood, we’re surprised the Oscars haven’t been more of a target for jewel heists over the years. But we couldn’t let this article finish without including one not so successful heist story. Oscar winner Lupita Nyong’o attended the awards ceremony in 2015 wearing what can only be described as a show stopping dress. Created by Calvin Klein, it was covered from top to toe in 6,000 precious pearls – or so the media was told. The dress was all over social media, gossip columns and ‘best dressed’ lists within minutes. So naturally, when someone found her hotel room door ajar the next day, they seized the opportunity and swiped he famous dress.

When they ripped off a few sample pearls and took them to a jeweller however, they were in for a rude awakening… the pearls weren’t precious gems after all, just convincing fakes! The thief stuffed Luptia’s $150,000 dress in a black bag, went back to the hotel, left it in the restroom, and called celebrity gossip website TMZ to tell the world all about the fiasco. At least he/she was (kind of) honest!

Seriously, don’t try any of this at home. Keep saving and you’ll get to that magic bank balance needed to buy her bling. Need some tips on that score? Check our guide to engagement ring budgeting and saving for an engagement ring.