We’ve all seen the surge in popularity of coloured gemstone engagement rings recently. Fast becoming as popular as diamonds when it comes to that ‘I do’ bling, it may not be long before we see another ‘diamond rush’, but with a difference… Instead of diamonds, it will be emeralds and precious gems this time round. Here’s the low down.

Did you Colombia is the country that produces the most emeralds in the world? The South American country produces between 70 – 90% of the world’s emeralds, with most of them coming from the Eastern Ranges of the Colombian Andes. The Coscuez mine is one of the most famous in the country, pretty much because it has already produced record emerald hauls… and because only a fraction of it has been explored so far. It is thought that the ground underneath the Coscuez mine (and others in the region) could hold untold supplies of emeralds – on a similar scale to the diamond rush in 1890s South Africa.

There are plenty of other indicators too, however. Modern couples turning away from diamonds due to sustainability issues and ethical concerns. Diamonds are not exactly rising in value. And there’s a general aesthetic trend towards coloured gemstones, particularly precious gems like sapphires, rubies… and emeralds. With demand continually rising, experts are projecting that coloured gems could eclipse diamonds as the typical engagement ring and rake in $10 billion in the next decade.

This development has been a long time coming. In 1998 Coscuez was already making up 77% of Colombia’s emeralds. The country has produced famous emeralds dating long before that too; the 630 carat Patricia Emerald from 1920, the 858-carat Gachala Emerald from 1967, and two astonishing finds from 1999 – the 2000 carat Tena Emerald and the 1100 carat Fura Emerald. And that’s just the tip of the iceberg. In short, expect great things. 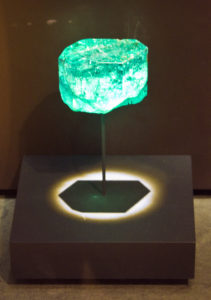 What’s the downside to all of this? Well, with increasing demand comes price hikes. According to Gemfields the price of emeralds has already increased by 500% since 2010. So if everything goes according to experts’ predictions, these green beauties could be fetching diamond prices in the not too distant future.

Just because emeralds come from the more developed region of South America, it doesn’t mean they’re immune from the same issues we’ve seen with diamonds. In fact, Colombia has been engaged in a harrowing civil war since the 1950s, which was largely funded (albeit illegally) by their emerald trade. Although now finally coming to an end, the higher than ever demand for emeralds means that there’s still a thriving ‘black market’ for the gems. These teething problems will no doubt be worked out over time, but for now, ‘conflict emeralds’ still remains a concern for many.

There’s still plenty to get excited about with emeralds… we can’t wait to see how emerald engagement rings take off in the very near future.