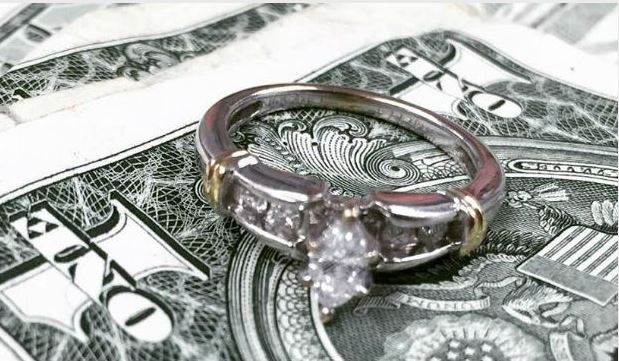 No, it wasn’t down the drain…

Just before last Christmas, the Salvation Army in Durham, North Carolina, made an unexpected but extremely generous discovery. It’s not uncommon for them to receive ‘hidden’ donations – some dollar bills stuffed inside a jacket that’s handed in, for example. But this particular donation was all kinds of mysterious…

As part of their festive fundraising, the Salvation Army takes to the streets in the run up to Christmas with those distinctive red buckets or ‘kettles’, ringing bells and appealing to passers by to drop in any change they can spare. The money helps those in need and funds the charity’s projects too.

At the end of the day when the buckets were counted up, one of them contained two tightly balled up one-dollar bills. Inside was a stunning diamond engagement ring! While at first they wondered if it could have slipped off someone’s finger, the fact that it was clearly disguised inside two bills made it obvious it was an intended donation.

The ring has a beautiful marquise diamond as its centrepiece, flanked by four smaller round diamonds and a silver band with gold accents. The charity plans to have it appraised and will then sell it to a jeweller.

Believe it or not, this kind of thing happens quite often around this time of year. Similar stories of engagement rings turning up in kettles have emerged from Wisconsin, Boston and Texas – and that’s just last Christmas! Last year a couple donated a whopping $500,000 cash into the little red buckets, and reports of gold bars, pendants and various other jewellery items have also been recorded.

It just goes to show, the spirit of giving is still alive and well in some places!