The issue of conflict diamonds is still as relevant now as it was 15 – 20 years ago. Huge improvements have been made in the area; the vast majority of diamonds in the global marketplace are now supposedly conflict-free. But ‘the vast majority’ isn’t every single diamond… and that means that countless communities are still being devastated, innocent people are still being exploited and terrorised, and countries are still in ruins because of wars and regimes funded by illegal diamond trading. Raising public awareness about conflict diamonds helps consumers make ethical choices – i.e. by purchasing conflict-free diamonds. With that in mind, here are 10 facts you should know…

1.  When public concern about conflict diamonds first reached its height in the 1990s, conflict or blood diamonds were estimated to make up around 4% of the global marketplace. It may not seem like much, but it still resulted in untold horrors for innocent people in war torn countries. Now, an estimated 99% of diamonds on the market are conflict-free. Not bad!

2. The Kimberley Process Certification Scheme requires that diamonds are sealed in a tamper-proof container during transport. They must also have a forgery-resistant certificate stating that the gem is from a conflict-free source. The certificate has a unique serial number, and it’s not uncommon to find this number laser-engraved onto the girdle of the diamond (don’t worry, you can only see it under a magnifying glass).

3. However, the Kimbereley Process is far from perfect for preventing conflict diamonds. Participation is voluntary; it only forbids rebel forces from using diamonds to fund war efforts (i.e. corrupt governments and the like still have free reign). It does not require independent auditing of diamond traders. And there is no specific requirement for individual diamonds to be traced to their mine of origin. 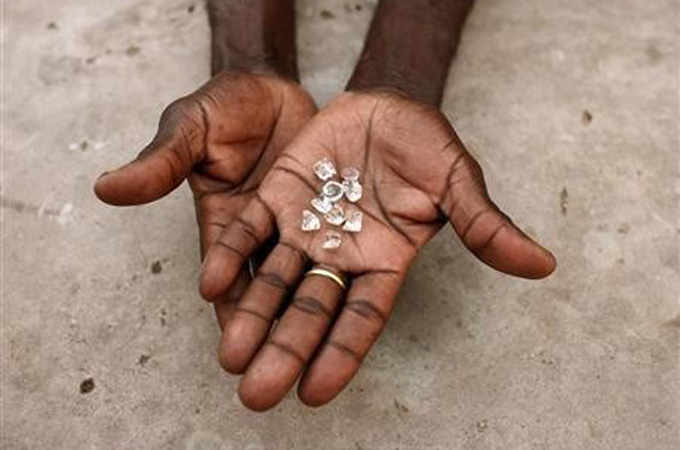 4. Venezuela, a country with a large supply of gemstones, stopped issuing export certificates in 2005. This meant they legally exported nothing, and illegally exported a lot of things. Naturally, this led to countless Venezuelan diamonds being smuggled across the border with falsified paperwork. While not ‘blood diamonds’ as such, it was definitely not a good situation. Now struggling to overcome a devastating economic crisis, the government has recently agreed to issue official documentation once again, which should result in stimulation of the mining industry.

5. The 2006 film Blood Diamond, starring Leonardo DiCaprio, details the gory details of the conflict diamond industry in Sierra Leone. Writer Charles Leavitt was very aware that big diamond companies like DeBeers would almost certainly sue him, so he ensured that every aspect of the script was fully researched and portrayed truthfully. The film was nominated for five Oscars, and is one factor of the ‘tipping point’ that turned public indifference about conflict diamonds into outrage.

6. Conflict diamonds are estimated to have resulted in 4 million deaths to date. During the civil war in Sierra Leone, the Revolutionary United Front used threats, violence and even dismembered innocent villagers in order to take control of the local mines. Over the course of the civil war, 20,000 people in Sierra Leone were mutilated and millions fled the country as refugees. The revenue from these diamond mines funded the RUF’s coup and they forced local villagers, including child soldiers, to guard and work them. 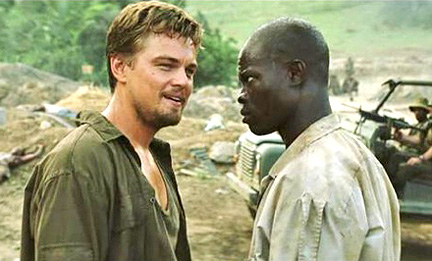 7. In 2006, the United Nations along with the US government published reports exposing the fact that near $23 million worth of conflict diamonds from the Ivory Coast had been smuggled into countries that were signatories to the Kimberley Process. This and similar revelations over the next few years led to one of the founders of the Process, Ian Smillie, resigning due to its ineffectiveness. While it did clamp down on the majority of blood diamonds, it’s not a perfect solution.

8. In Zimbabwe the Marange fields contain the one of the world’s most plentiful supply of diamonds. Soon after they were discovered in 2006, Mugabe’s armed forces took control, reportedly murdering 200 independent miners and replaced them with conscripted labourers and children. However, the Kimberley Process and the diamond industry in general has no provision for when a sovereign government kills its own citizens. This means that Zimbabwe diamonds are in fact conflict diamonds despite not being officially classed as such, and are readily available in the global marketplace.

9. The most common method of conflict diamonds successfully making their way to legal trade is through smuggling. Diamonds will be smuggled across a border from an ‘unsafe’ country to a ‘safe’ one, often in somebody’s digestive tract. In the ‘safe’ country, they are then relabelled and certified as being sourced in that ‘safe’ country instead of their original one. Guinea for example has at various points exported more diamonds that it could possibly have mined.

10. In 2014 the United Nations lifted its diamond export ban on one of the countries most associated with conflict diamonds in the past – The Ivory Coast. The decade long embargo ended after the country’s civil war was finally done and dusted, so that authorities could relaunch the sector to help rebuild the country after the war.