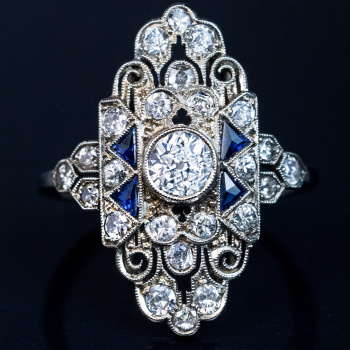 Art Deco jewellery, and Art Deco engagement rings in particular, are fast becoming one of the most sought-after styles in antique jewellery. Full of colour, precious gems and crazy cool designs, they suit today’s alternative bride perfectly…. AND they’re antique. If you’re considering an Art Deco style engagement ring, here’s what you should know…

First, a brief history. Art Deco, shorthand for ‘Arts Decoratifs’, is a style of visual arts, architecture and design that originated in France just before the outbreak of the First World War. By the 1920s it had exploded in popularity both in Europe the US and further afield, and it remained the most prominent aesthetic style throughout the 1920s and 1930s. The Art Deco style was so influential it can be seen in everything from vacuum cleaners to airplanes. It represented the best things about that era in history; luxury, glamour, technological progress, and a hint of hedonism. It had lots of eclectic influences, including cubist and fauvist art, furniture from the time of Louis XVI, and the art of ancient China, Japan, India, Persia and Egypt. Just some of the better known Art Deco landmarks in New York City alone include the Chrysler Building, the Empire State Building and the Rockerfeller Centre.

Basically, artists and designers during the Art Deco era combined two things; ancient and foreign art with a revival of geometric designs. It was a reflection of what was going on in the world at the time; Tutankhamun’s tomb was discovered in 1922 (to give just one example of ancient civilisations making headline news), while there was continual technological advancement regarding air travel, architecture and much more. Travel, art and technology were three of the major themes apparent in many Art Deco pieces, whether city skyscrapers or humble pieces of jewellery. 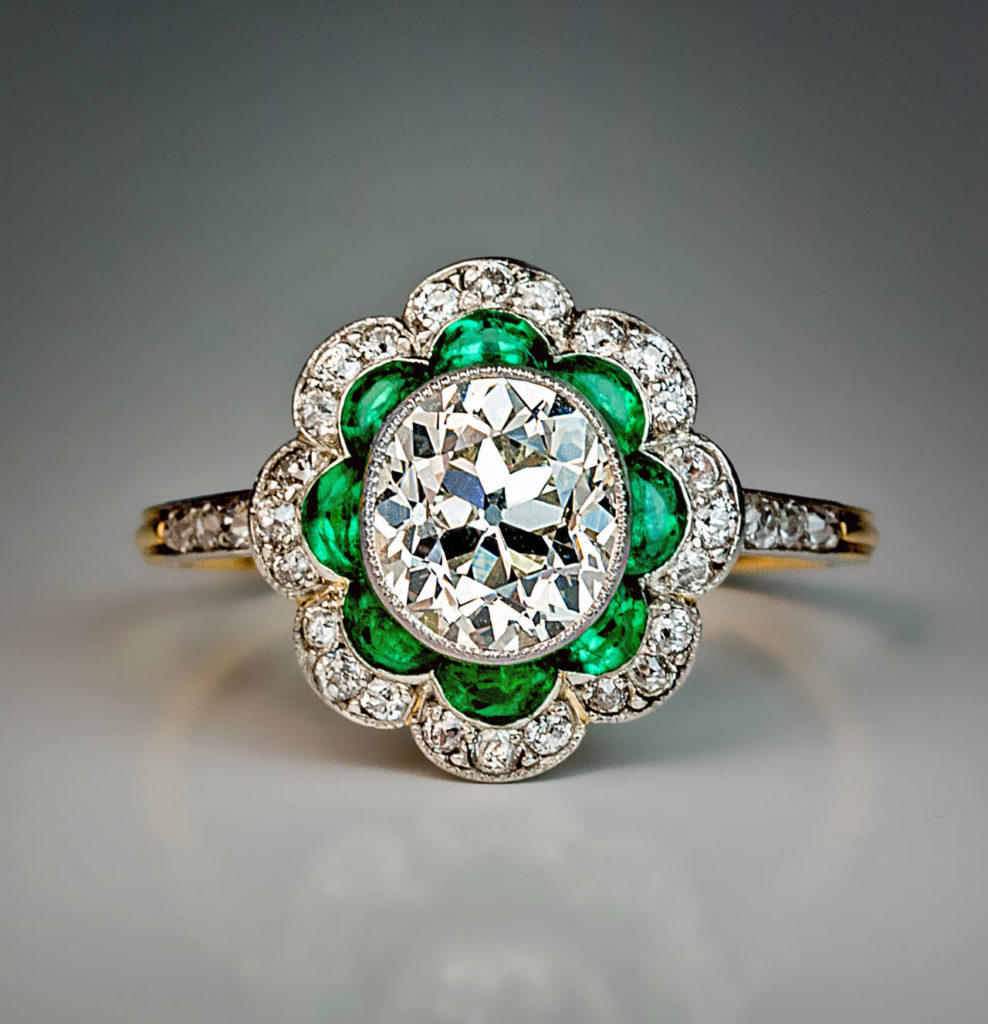 As far as jewellery was concerned, two key technological aspects of the Art Deco era were precision stone matching and superior stone setting techniques. With design, there really were no limits. Designers experimented with bold colours, big chunky shapes, vertical lines and distinctive motifs, and often juxtaposed all of the above with the more romantic, feminine and natural designs that preceded the period. Quality control become much more important too, so genuine antique Art Deco engagement rings are often just as durable as a newly manufactured ring today would be.

As with any design period however, there were certain trends. Unfortunately for the traditionalists out there, yellow gold was very much out of favour during the Art Deco years. It was all about platinum, white gold or sterling silver.

White diamonds and brightly coloured gemstones were the only rocks worth talking about – and using both in a ring design was pretty much the gold (or should we say platinum) standard in engagement ring design at the time. There was also plenty of experimenting with obscure and ‘forgotten’ materials of foreign influence, like jade, black onyx, mother of pearl and lapis lazuli.

Curves and romanticism was out, and pointed stone cuts like the baguette or square carre were very much in. Or better yet, contrasting a traditional round diamond with cool square sapphires and lots of platinum on show. A trend for stones cut with large table facets was very apparent – all the better for creating big chunky designs. 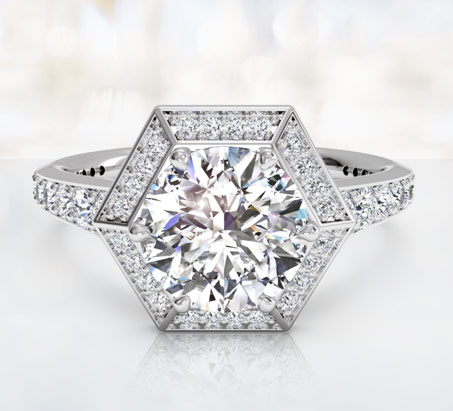 Settings were widely varied and always a defining part of an Art Deco engagement ring. Think a white diamond surrounded by emeralds or rubies in a setting full of angular, geometric shapes, and you’ve got something characteristic of the period. Enamel and inlay were popular setting features, and the most popular types of setting – unlike the prong setting we know and love today – included channel and bezel-set stones.

Certain design motifs were all also common in the 1920s and 1930s. The fan shape was one, and circles within squares, or juxtaposed shapes in general, was another. Check out Scarlett Johansson or Ashlee Simpson’s engagement rings for examples of the latter.

Above all however, craftsmanship was the top priority for Art Deco jewellers. Rings were handcrafted to the highest standard and made using only the finest quality gemstones with the best clarity and colour. Every single square inch of the ring was finished and polished, inside and out. Many rings from the period bear a maker’s mark or a hallmark, but there were also plenty of countries who had yet to adopt any kind of hallmark system. That means your Art Deco engagement ring could have a very traceable or a very mysterious history. All part of the fun.

The 1920s and 1930s was when mass production of, well, everything took off. Certain Art Deco designs become enormously popular and were replicated by pretty much everyone, which means that unfortunately there are still plenty of fake antique Art Deco rings around today. Thankfully, modern technology and expert jewellers will be able to tell you straight away if your chosen piece is the real deal or not. For a start, look for a hallmark, check the clarity of your stones (best done by the jeweller who knows more about these things), and look for signs of wear and tear, albeit minimal sings. Your ring should still be in excellent condition if it’s a real, well kept antique. 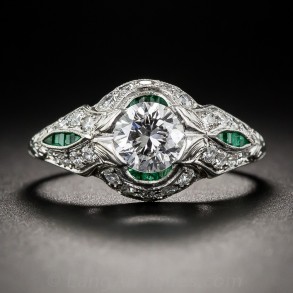 If you do decide on an Art Deco engagement ring, you’ve picked a unique and exciting style. It’s guaranteed to be full of colour and life, and a real conversation starter. However, you should be prepared for a long search to find the perfect Art Deco ring for you, simply because there’s so much choice out there. You’ll see endless design varieties and you’ll probably love several of them equally. Choosing just one is very difficult, and almost impossible.

The standard guidelines for antique engagement rings apply here: make sure it’s in excellent condition, get it properly appraised and valued, talk to your jeweller about upkeep and maintenance, and if you’re advised not to wear your engagement ring every day, then for Pete’s sake don’t wear it every day. We know it’s hard, but it’s better than an engagement ring with a stone that’s lost forever or a setting that’s irreparably damaged.