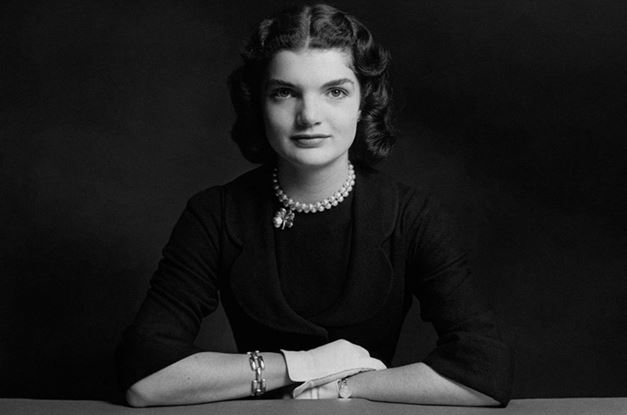 Behind every President of the United States, there has been a First Lady. And on every first lady’s hand has been at least one fine piece of jewellery. While we’re sure the likes of Michelle Obama and Barbara Bush have owned plenty of rings in their time, their engagement rings are surely their most prized pieces.

With all the political hype around in the run up to the 2016 Presidential election, we decided to take a look at some First Lady engagement rings. Here are 4 of the most interesting we’ve found…

Outgoing First Lady, Michelle Obama, met her husband of 24 years in 1989. She was employed at a law firm and when a summer associate from Harvard began working with them, she was appointed to be his advisor. That associate was Barack Obama. After refusing his romantic advances for a month, she agreed to spend a day with him. According to Barack, it was their mutual love of Stevie Wonder that helped them click right away and encourage Michelle to agree to that first date. She says ‘by the end of that date it was over… I was sold.’

Barack’s proposal in 1992 was an old classic; a certain velvet box was served instead of dessert at the end of a romantic candlelit dinner. The ring he presented her with is just as classic; a yellow gold band with a diamond solitaire. In keeping with the traditional style, Michelle wears it with a plain yellow gold wedding band. Despite a significant change in their circumstances since the 1990s, Michelle has opted not to upgrade her ring. 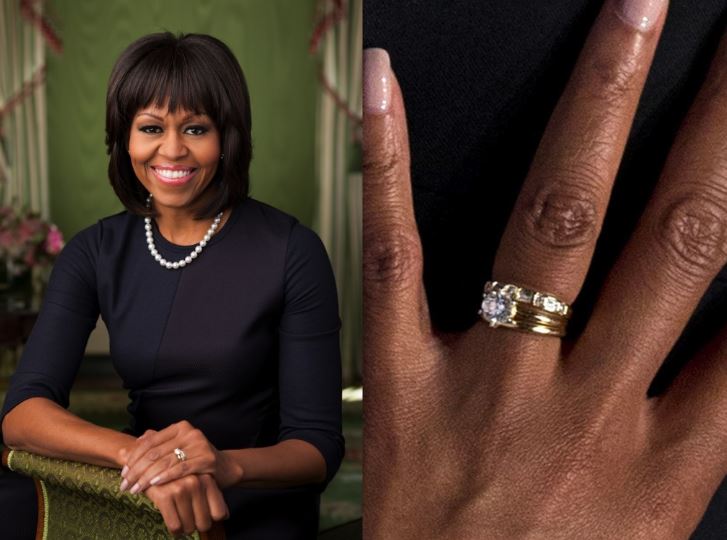 She’s been a first lady to her husband Bill, but now the tables could be about to turn, making Hillary Clinton the first female POTUS and Bill the First Gentleman. The couple met as students at Yale Law school. When Bill wouldn’t stop glancing over at Hillary as she was trying to study, she made the first move and introduced herself. Bill allegedly asked her to marry him twice over the course of their relationship, and she refused both times. When she was visiting Bill’s hometown of Arkansas and pointed out a house she liked, Bill bought it and told her ‘now you’ll have to marry me because I can’t live in this house by myself’. Finally, she said yes!

Hillary wanted as little fuss as possible, and didn’t even want an engagement ring. However, at some point she must have accepted a belated ring from Bill because she now regularly wears two; the first is a thick band encrusted with large cushion cut diamonds and the second is an emerald-cut solitaire diamond with baguettes on each side, set on a platinum band. 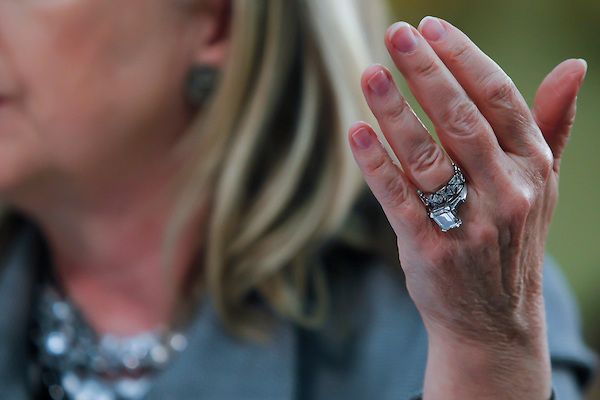 As political engagement rings go Jackie Kennedy’s is by far the most talked about, and for good reason. Young Jackie met John F. Kennedy, then a congressman, at a mutual friend’s dinner party in 1952. He became a senator shortly afterwards, and they married soon after that. Rumour has it the proposal was more of a strategic decision given Kennedy’s profile, but they loved each other nonetheless. He popped the question in booth no.3 in Martin’s Tavern in Washington DC.

With the help of his father Joseph, John picked out a ring that incorporated his lady’s favourite gemstone – emerald – as well as the traditional diamond. Both stones weigh in at just under 3 carats and are flanked by several marquise diamonds to form a leafy branch motif. The double band is also encrusted with square cut diamonds. It’s pretty stunning, so it’s no wonder this is one of the most iconic engagement rings in history. 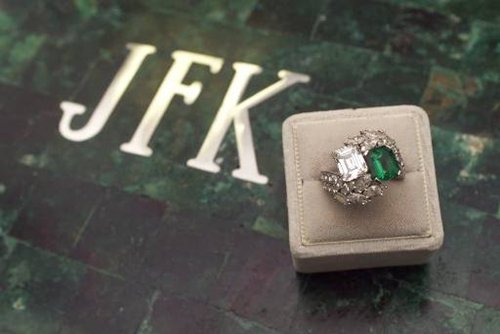 President Franklin D Roosevelt and his First Lady Eleanor’s marriage may not have been one of the happiest in history. They were introduced on a train in New York, although they had met before as children since they were in fact distant cousins. Franklin proposed when he was 22 and Eleanor just 19, and his mother staunchly opposed the union. She believed they were too young to marry and several times tried to force them to break the engagement.

Despite an interfering mother-in-law and a fair share of other marital struggles, the couple were obviously very much in love once upon a time. Franklin gifted Eleanor with a fabulous engagement ring, which just so happens to be one of the very first examples of the Tiffany setting. This six-prong setting raises the diamond above the band and lets the maximum amount of light enter the diamond for the biggest sparkle. It would become the ‘gold standard’ engagement ring for generations.

Eleanor’s 3.4 carat round brilliant centre diamond is almost flawless. The ring’s shoulders are set with 6 smaller diamonds on each side, with a yellow gold band topping it all off. She was forbidden by her mother-in-law to wear it for a year after receiving it, and said in a letter to Franklin ‘I am longing to have my birthday present from you for good, and yet I love it so I know I shall find it hard to keep from wearing it! You could not have found a ring I would have liked better.’ Aww. 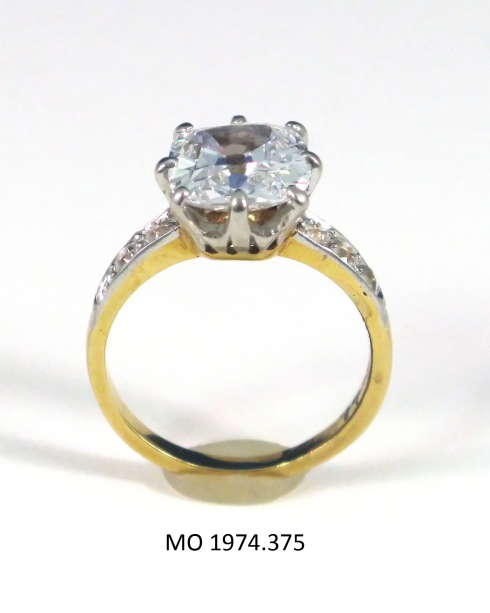