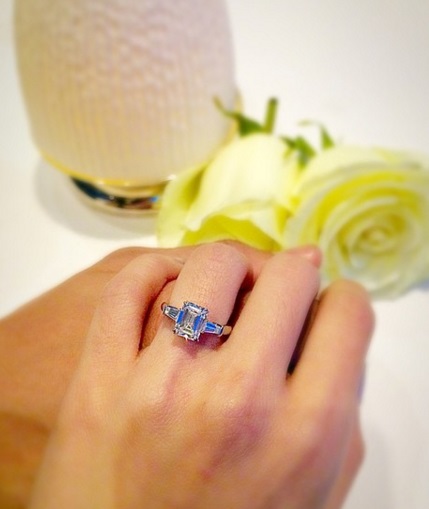 Spanish-Filipina commercial model and actress, Marian Rivera flaunts her ring from Filipino actor, commercial model and film producer, Dingdong Dantes. Dingdong popped the big question on August 9 where he got down on one knee and proposed marriage for the second time to his long-time girlfriend during the live coverage of the dance show Marian.

Comment: I’d say Dingdong Dantes couldn’t have chosen a better ring for his queen, who now shares the distinction of having the same engagement ring design as the late Grace Kelly, an American actress and once Princess of Monaco.  Grace Kelly’s ring was from Cartier, while Marian’s from Harry Winston.  The fiance really did his research because the emerald-cut diamond engagement ring he got for Marian is Harry Winston’s pioneer, not to mention classic, design.