Just LOOK at how beautiful this diamond is…

We’re always surprised to people’s reactions to this simple fact: diamonds are not rare. Well, the kind of white diamonds you see on every woman’s engagement ring aren’t. There are, however, some kinds of diamonds which are VERY rare. Called ‘fancy colour’ diamonds, they are seriously expensive and seriously difficult to find – the chances of mining a fancy colour diamond is 1 in 10,000 and the chances of finding a large fancy colour diamond are even slimmer.

Fancy colour diamonds come in variety of shades, the most common of which is yellow. These are different to ‘yellow diamonds’ as we know them – those are white diamonds with a yellow tint, whereas the ‘fancy’ variety is yellow through and through. But let’s not get into that. The rarest fancy colour diamond is red, and following not far behind is pink.

Fancy pink diamonds are insanely beautiful, and insanely expensive. In recent years some of these babies have been auctioned for tens of millions of dollars. For example, in 2009 a 5-carat pink diamond sold for $2.1 million – and that’s just a ‘small’ one. Late last year, a much bigger version made history by selling for an incredible $32 million. 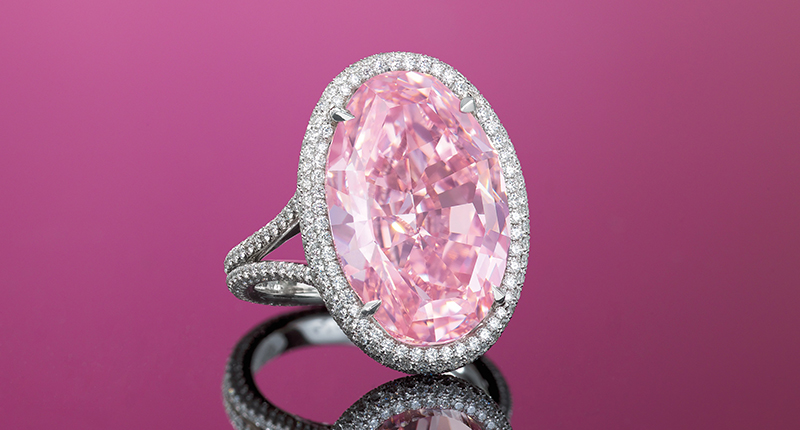 Famous auction house Christie’s had what is probably the most beautiful pink diamond we’ve ever seen on display this past November. Called the ‘Pink Promise’, it’s an oval shaped Vivid Pink diamond. That’s the highest grade of colour a gemstone can get, and the highest rating the Gemological Institute of America has ever given for a fancy pink stone. It weighs 14.93 carats and boasts VVS1 clarity. VVS1 stands for ‘Very Very Slightly Included’ and is the second highest clarity grade possible – although the highest grade, IF (Internally Flawless) is very, very uncommon. Finally, it’s presented in a mixed cut.

So, needless to say this diamond is a pretty big deal. The Pink Promise was originally bought by gemologist and jeweller Stephen Silver in 2013. Then, it was a 16.21 carat, Fancy Intense pink diamond (one colour grade lower than Vivid PInk). Silver bravely believed that if the stone was cut again, its colour could become much more pronounced and it could be worth much more than he paid for it. Luckily, he was right.

Stephen worked with a master gem cutter and spent years analysing the stone to achieve the perfect cut. The stakes were high as the sky – if he got it wrong, he would quite literally be throwing away millions of dollars in lost carat weight. Removing over 1 carat from the Pink Promise’s total weight, Silver sent his stone to be re-evaluated by the experts. He must have breathed a sigh of relief when they told him their conclusion; the colour grade went up to the highest grade possible, and the clarity was raised to just a hair’s breadth short of Internally Flawless.

The Pink Promise sold for $32 million at Christie’s on 28th November. The total price is just short of the world record per carat price for fancy pink diamonds. The stunning gemstone is now set in platinum with a white diamond halo and a split shank, diamond encrusted band. We hope it makes someone, somewhere, look damn good when they wear it!