Skip to content
Home Facts Getting an Expensive Engagement Ring? You NEED to Read This! 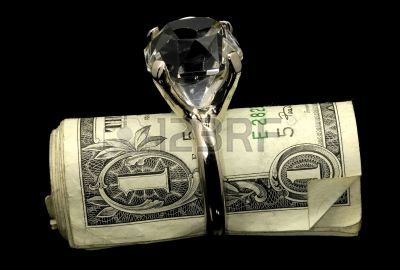 How much you spend on an engagement ring is a direct indication of how in love you are, right? Wrong!

An academic study that was first published in 2014 has been cropping up around the internet again recently. Economics professors from Emory University surveyed 3000 married or formerly married US adults. They quizzed participants in the study on a number of topics, specifically how much they spent on engagement rings and weddings and the outcome of those engagements and weddings.

Guess what? The more a couple spent on an engagement ring, the more likely they were to end up divorced. Yes, really. The same goes for weddings. Ouch. Diamonds aren’t forever after all, are they?

The research had two main findings; those who spent from $2000 – $4000 on an engagement ring were 1.3 times more likely to end up divorced than those who spent $500 – $2000. Interestingly enough, spending less than $500 on some bling also spelled doom for marriages.

The second finding on weddings is even worse; women spending over $20,000 were 3.5 times more likely to get divorced than those spending $5000 – $10000. Unlike engagement rings however, spending $1000 or less on a wedding decreased the chances of divorce. The average cost of a wedding in the US clocks in at $30,000 though, so we’d take this information with a grain of salt if we were you.

So, why? The researchers make a good point; spending so much on something that’s ‘technically’ unnecessary (sorry, but it’s true – there’s no legal requirement for an engagement ring or a lavish wedding ceremony) can often lead to financial stress early on in a marriage, and possibly even debt stress too. That’s bound to put a significant strain on even the most rock-steady couples, so it makes sense that those who spend less end up happier.

To throw something of a curveball into the mix, researchers also found that having more wedding guests (as opposed to spending more money) positively correlated with longer marriages, as did having a honeymoon.So if you’re really worried, just go for a big, budget-friendly wedding, a no-fuss engagement ring, make sure to book a honeymoon, and you should be fine.

Or, you know, just do whatever makes you both happy. Your call.