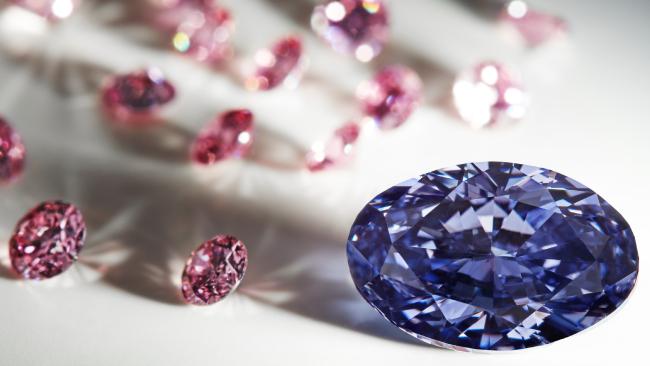 How’s this for some engagement ring bling?

You’ve probably heard of canary yellow diamonds, but did you know that everyone’s favourite engagement ring rock can come in many other colours too? Don’t get too excited – anything other than transparent, yellow or brown is extremely, and we mean really extremely, rare and equally expensive. So when a 9-carat chunk of violet diamond was discovered in Western Australia’s Argyle mine last August, pretty much everyone lost their minds.

Red and pink diamonds aren’t unheard of although they’re not often seen, but there are only a very, very small number of violet diamonds in existence. Only 12 carats in the last couple of decades have been mined, and that’s rough diamond. Compare that to the 135 million carats of ‘normal’ diamonds mined last year alone, and you’ll see just how unbelievable this discovery is.

The Argyle provides around 90% of the world’s pink and red diamonds, but even experts aren’t entirely sure how a violet diamond was able to form in the same mine. The presence of different minerals and chemicals during the formation process is what gives colour to gemstones, so you’ll generally find gems from the same colour spectrum in the same mines.

The Argyle Violet diamond weighed 9.17 carats when it was pulled from the mine, but when cut and polished it became a 2.83 carat flawless oval cut stone. Nonetheless, it’s still the biggest violet diamond on record. It’s due to be unveiled to the public for the first time at Rio Tinto Diamonds’ annual pink diamond display later this year, and gem collectors and experts are extremely excited about it.

Violet diamonds in the past have sold for as much as $1-2 million per carat, so if this gem is ever bought you can expect an absolute minimum price tag of $4-6 million, and probably much more. Not much to ask for one of the rarest gems ever found, is it?

If you fancy seeing the Argyle Violet for yourself, you can do so in June 2016 in either Hong Kong, New York or Copenhagen.