Never heard of lab diamonds? You’ve clearly been living under a rock – and not a diamond one. Lab grown diamonds have the exact same appearance, chemical composition, and other qualities as ‘natural’ mined diamonds. The only difference is they’re grown grown in a lab rather than in the ground, and in just a few months rather than billions of years.

With consumers becoming more ethics and prince conscious, lab grown diamonds are starting to soar in popularity. The environmental impact is greatly reduced, there’s no risk of your beautiful stone being tainted by conflict diamond controversy, and guess what? They can be up to 30% cheaper than natural diamonds depending on the individual qualities of the stone. What’s not to love? 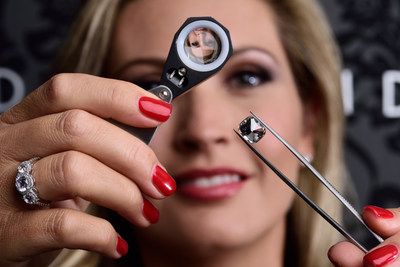 MiaDonna, the world leader in responsible and sustainable diamonds, has been growing lab diamonds for quite some time now. And they’ve now created the USA’s largest lab grown diamond ever in their Maryland lab. Weighing in at 6.28 carats, this cushion cut diamond boasts a J colour grade (near colourless) and VS2 clarity grade (very slightly included). In other words, it’s extra sparkly and excellent quality.

But here’s the best part. This lab grown diamond costs $52,000. Admittedly, that’s not cheap. But an equivalent mined diamond with the same credentials costs… over $100,000, according to the RapNet Diamond Network. Wow. On average (there are lots of variable factors involved) a one carat, top quality round ‘earth’ diamond costs in the region of $5,000. The same stone from a lab costs around $3,600.

It just goes to show – sometimes tradition isn’t the be all and end all.