What is a Claddagh Ring?

A claddagh ring is a traditional Irish ring that dates back to the 1790s. It’s named after a village in Galway; Claddagh was a small fishing community across the river from Galway city, on Ireland’s wild west coast. Nowadays it’s a suburb in the greater city area, but back in the 18th century it was a distinct location with unique residents. Galway was a bustling trade city with a significant British and Spanish influence. The residents of Claddagh however were traditional folk who spoke Gaelic, adhered to their own traditions and beliefs, and wanted as little to do with the city across the river as possible. They crossed over once a day to sell their fish, and that was it.

Naturally, it was a Galway man who created the claddagh ring. His name was Richard Joyce, and on returning to his home city after a number of years in slavery abroad (it’s a long story), he set up shop as a jeweller. His master had trained him as a goldsmith, and he was keen to make a life for himself in his true home. He came up with the ring design still used today and named it after the village across the water. It’s also thought that the Claddagh villagers wore the ring as a form of identification, and this is where it got the name. Either way, it was soon a hugely popular accessory.

So is it an Engagement Ring, or Not?

Officially, no. But if you’re looking for a unique design with a beautiful meaning, then a claddagh ring makes an awesome engagement ring. Let us explain: 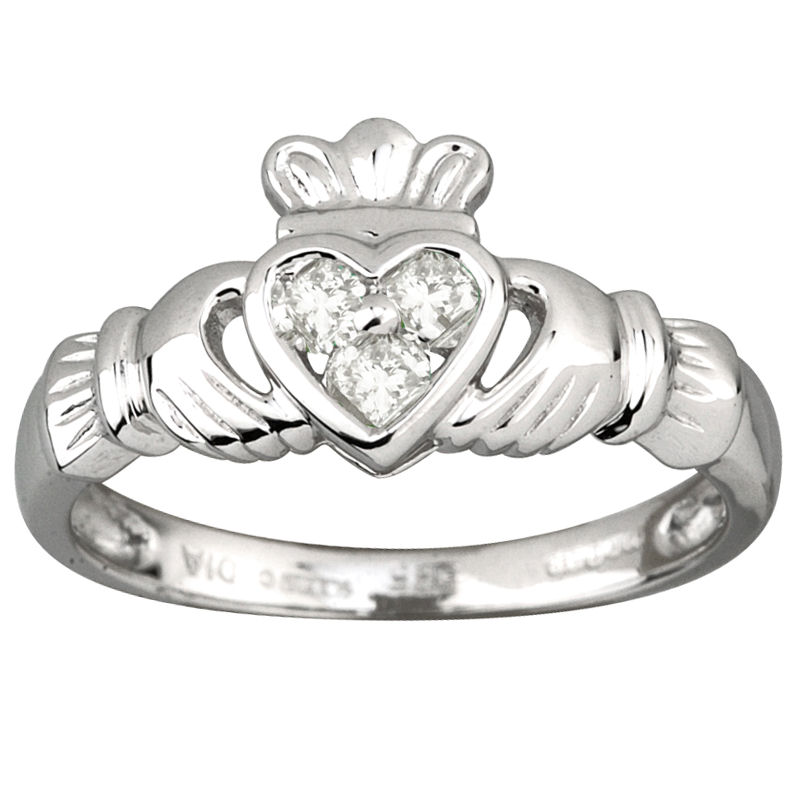 The claddagh ring design consists of a heart held by two hands, with a crown on top. It may look a little weird, but each element of the design stands for something. The heart is for – you guessed it – love. The hands symbolise friendship, and the crown on top is a symbol of loyalty. If you ask us, that sounds like three of the most important elements of a marriage.

Claddagh rings are traditionally given to friends, family members and sometimes lovers in Ireland. Basically if you have a close relationship with someone and want to celebrate or honour it, you give them a claddagh ring. Man, woman, father, friend, child – it doesn’t matter! They are traditionally created in just gold or silver, but there’s nothing stopping you from choosing a design with a diamond heart for a slightly more traditional look.

How to Wear a Claddagh Ring

As well as the design of the claddagh ring, the way in which you wear it also has a special meaning. If you wear it with the pointed end of the heart pointing towards your finger nail, it means you haven’t found that special someone yet and are looking. If the heart points inwards, then it means your own heart belongs to someone – and it doesn’t necessarily have to be the person who gave you the ring.

So if you choose to wear a claddagh ring as an engagement ring, make sure the heart points the right way or there could be trouble!